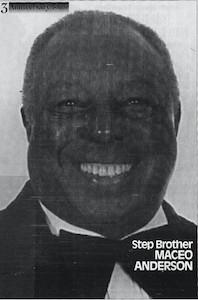 In the days when black tap lines dared not perform south of the Mason Dixon line, one group broke color barriers so that others could follow — the Step Brothers. Only one of the original four survives, 84-year old Maceo Anderson, and he will be honored on National Tap Dance Day with Gene Kelly and Ann Miller.

Maceo will receive the annual Flo-Bert Award for lifetime achievement in dance at the Haft Auditorium on May 29, 1994. Recently, Maceo almost forfeited his claims the only survivor of the illustrious group in an accident where his car rolled over three times. He said he believes the Lord saved him so that his ministry to the homeless could continue. He serves as a minister at the Holy Tabernacle Outreach Mission in Las Vegas, Nevada.

As a young boy of six years Maceo delivered clothes his mother washed and ironed in South Carolina Because black people were not permitted on the streets after 6 p.m., he would often deliver the clothes in the early hours of the morning so he wouldn’t be picked up. He became street smart at an early age.

When a sister sent for the family, Maceo, his mother and sister took a cotton boat from South Carolina to Harlem. Asa youngster in Manhattan, he stole newspapers, slipped under the turnstile and rode to 52nd Street and Broadway. He soon learned that he could make more money dancing than from selling papers.

His mother converted the basement in their apartment building on 126th Street to a junior hoofer’s chub. She would cook large pots of rice and beans and feed the children while they practiced their steps.

When he was only seven years old, Maceo auditioned for Ida Mae Chadwick, a well known white song and dance artist. He was selected to tour with her group because he could also do some Russian steps. Because the act was integrated, they couldn’t work below the Mason Dixon line.

In order to learn new steps, Maceo would sneak into the movie theaters. On weekends the Lafayette Theatre had amateur night and he soon discovered the Hoofers Club which was located under the Lafayette Theatre. There was a restaurant and pool hall in the front and a dance floor for tap dancers in the back. The owner loved tap dancing and tap dancers were always welcome. “Bill Robinson would come in, shoot pool, then go to the back, take off his coat and tap,” Maceo said. “He danced straight up. He didn’t do that ‘dig in’ stuff. He was an elegant tap dancer, one of the greatest names in the business, the grand-daddy of tap dancers.”

“Bubbles started dropping heels and did a rhythm turnaround,” Maceo recalled. “He also did trick turns and then turned back to the other way. That was his style, rhythm dancing with heels and toes, the ‘dig in’ stuff, the hard dancing. He is called one of the great rhythm dancers.”

In 1925 Maceo, Al Williams and Red Walker formed a trio. After dancing in a show called “Moon Over Alabama,” they wanted to dance at the Cotton Club. In order to avoid the doorman, former heavy weight champion Jack Johnson, they entered through the kitchen. During the breaks Duke Ellington walked past the kitchen to the water fountain. The tap trio showed him their steps and pleaded with him for an audition. Finally, he agreed, and they auditioned with a military tap routine and were hired as the only regular tap act at the Cotton Club for the next four years.

In 1927 the trio added a fourth member, Sherman Robinson, and adopted the name, “Step Brothers.” They often toured with the Ellington band.

“Duke Ellington was a wonderful man, such a gracious man,” said Maceo. “he wrote a tune called The Mystery Song for the Step Brothers. It was a tap dance number.”

The “challenge” dance became their trademark. Each member danced their own specialty with the others clapping their hands similar to the way Maceo had danced as a newsboy.

The Step Brothers used the jazz rhythms of Ellington, the elegance of Bill Robinson, the technique of Bubbles and the hoofing from many others, plus some acrobatics. “We picked up jazz-tap and put together a clap-hand beat that would give us style, plus precision,” Maceo explained.

They were the first black group to play the Radio City Music Hall in New York, the Copa City in Miami Beach and the Chez Paree in Chicago

They slept on cots in the theatre basements when hotels did not admit them. Black families cooked their favorite foods in homes when they were not permitted in restaurants. “I didn’t think about racial issues,” said Maceo. “I was more concerned with the performances.”

After Prince Spencer and Rufus “Flash” McDonald joined the group, they became the first black act to play the Lido in Paris and the Café De Paree in London where they stayed, for six years.

They toured twelve European countries and received standing ovations from kings and queens. In the United States they were received by Presidents Truman and Eisenhower.

The Step Brothers appeared in 40 movies and danced with the films’ greatest, including Fred Astaire, Gene Kelly and Donald O’Connor. Honi Coles said that when other tap dancers couldn’t get work, the Step Brothers were working.

Maceo credits Jerry Lewis for opening doors for them. Martin and Lewis would not sign a contract to perform at Copa City in Miami Beach unless the Step Brothers were signed. No black artist had ever performed there. This opened the door for many others like Sammy Davis, Jr., Lena Home.

“Jerry treated us like family,” Maceo said. “We stayed at his home and hung out with him. I remember when Jerry picked up Al Williams handicapped child and went out and bought a wheelchair for him.” Maceo believes this might have been the beginning of Jerry’s love and concern for handicapped children.

Maceo is excited about the future of tap. Three of his former students Michael Allen, Van Porter, and Robert Reed who call themselves “The 3rd Generation Steps” will perform in his honor at the “Tap Extravaganza ’94.”

Maceo said he admires and the leadership of Gregory Hines. “He hasn’t forgotten the guys who help teach him a step or two backstage at the Apollo or Lafayette Theatres,” Maceo said. “He hasn’t forgotten his roots.” Many of the living legends of tap will honor Maceo on May 29th in New York. He leaves a rich legacy to the tap world.

Moved this paragraph to the user description- you can delete it here: Melba Huber of Allen, Texas is celebrating her 50th year as a dance teacher. In the late ’40s, she spent every Saturday afternoon at a college for black students in Austin, Texas where she taught all types of dancing to children and adults.

“Everything was very segregated and no one would teach them. I could not imagine anyone who wanted to dance not having a teacher. It was a beautiful experience and I am still in touch with some of them. I am proud that they call me a pioneer in the development of dance for black children in Texas. I feel that I owe the great black jazz musicians who inspired me and continue to do so.”

Read the publisher statement of this issue