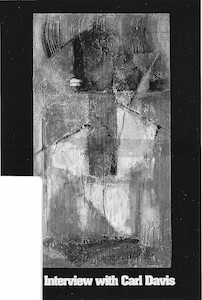 Carl Davis has a love affair with painting. He paints because he loves to do so. “Anything I’ve learned about life came from looking at something or someone, and painting what I’ve seen and felt,” he says. “It’s the only art form that allows free expression without any bounds.”

Carl’s paintings were recently exhibited at Art 54 Gallery in SoHo.

Horace Banbury: Carl, you say that painting is a love of yours; that it is instructive. Tell us what you mean.

Carl Davis: Painting is the most therapeutic thing I’ve ever done in my life. It gives me an opportunity to express myself in a manner that is quite free, uninhibited by assignment, and, as a result, I’ve been able to bring forth those things that have been housed within me for years. I’ve always loved painting, however, one must make a living, so for the last forty years, after being devoted to the commercial world, and working for others, I am now able to bring forth those things I’ve always wanted to do. So it’s like a dream fulfilled.

My discovery that I have diabetes turned out to be a blessing in disguise. It was then that I realized that I had to fill my days with something, so I started painting again, and painting seriously—distracting me from the constant care and concern about being ill. In doing so, I began painting in the fresco style, a technique that had been in my head for years; something that I had never studied but learned to do by reading and experimenting for the last five years. More importantly, I’ve devoted all of last year to this technique.

H.B.: Tell us about the fresco technique.

C.D.: The development of fresco painting is somewhat foreign to the African-American community. I don’t think very many of us use it. I can’t say for sure. I am just not used to anyone else who works like I do.

In Europe, I first saw it in Barcelona in the work of Antonio Tapies and Jose Maria Sicilia. Here in the United States, I am familiar with the work of the Italian painter Giglio Dante on Long Island, whose technique is similar to mine, although my style is more raw.
The fresco technique involves mixing several materials: plaster, wax, and gesso.Because of its weight, I don’t work on canvas but on tempered masonite or wood. First, an application of paint is used. Further applications are done very quickly because of the rapid drying time. One has almost to be like a chemist in this regard.

H.B.: Who has influenced you most?

C.D.: The influence on my work has come from one larger-than-life painter, Romare Bearden. I learned much from his work. In our race, our mouths are unusually beautiful, our noses, the shapes of our necks, our heads no one has captured that like Bearden and he has done so in an abstract manner, and that’s what I try to do in my paintings. These things can’t be captured just with a brushstroke. I think they are captured when you start working in fresco with color, depth, textures and patterns.

H.B.: You grew up in Cincinnati and was nurtured by a creative family. Tell us more about your background.

C.D.: Sure, I was very fortunate. I had an unusual and incredible family. There were eight of us and my mother died when we were all very young. We all are creative. Our creativity was nurtured in our Saturday morning art classes at the art museum. We were poor but very proud, and to this day we continue to support each other. I don’t care what anyone says about the African-American community, what’s missing today is the importance of family.

C.D.: I had accumulated many paintings, space became limited, and since I wished to show my work, I decided that I would have to exhibit. Unfortunately, as I talked to gallery owners around New York, I was disappointed to learn that one had to have “known” name, or a gutsy manager who will get you in. I associated myself with Manu Lawrence of Gallery Annext in Tribeca. He was the first person who hung a piece of my work, and it sold, and that’s where it all began. I came to Art 54 Gallery because it is a gallery that allows emerging artists to exhibit. When the director saw my work he suggested a one-man show

H.B.: Apart from Art 54 Gallery, where e else have you exhibited?

H.B.: You have worked in both the public and private sectors, including the New York Times?

C.D.:  Yes. For the last ten years I worked there as creative director in the Advertising Department.

H.B.: In your current exhibit, African images inform your work Tell us about that.

C.D.: What concerns me most on a critical level is that here in America we tend to paint what we think people want to see—what will sell-as opposed to painting what I the artist would like people to see. Outside of the United States, when we go to countries like those in the Caribbean, or in Africa, these people paint exactly what they feel, exactly what comes through the tips of their fingers onto the surfaces they are working on. In my present show, what you see is me. The people that you see in my work are not painted from models, they are from my head. My painting of Jessye Norman, for example, is done in a way that doesn’t show her features, but the whole essence of the piece is Jessye Norman – the movement, the fabric, the lines, the thrill of watching her perform. That is what I try to capture. This is what I feel, this is what I see, this is what I want you to experience. I want people to look at my work and find something new every day.

See a complete issue of Routes, A Guide to Black Entertainment September 27, 1994 as PDF