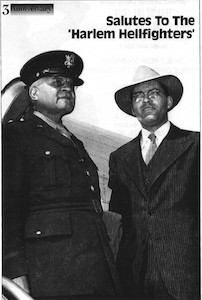 For 81 years, New York City’s own Harlem Hellfighters have served both State and Nation as Citizen-soldiers, all while fighting the harder and longer battle for civil rights. Here is the story of this famous African-American regiment from Harlem.

Until 1913, black Americans were denied the right to serve in the National Guard of New York State, but, after many months of urging by the Lenox Community Council, Governor Charles C. Whitman finally authorized the formation of a Regiment of Colored Infantry in the New York National Guard, appointing a white attorney, Colonel William Hayward, as the first commander.

The response from New York City’s black community was overwhelming, and soon, volunteers were flocking to join at the disused dance hall on 7th Avenue and 132nd Street that served as this unit’s Armory.

The volunteers drilled there, or at Camp Harlem — the city’s streets and parks. In 1916, the 15th Regiment of Colored Infantry of the N.Y. National Guard was formally accepted into the State’s Organized Militia forces, and presented with its own flag.

By 1917, it was up to full strength, and was accepted for wartime service after the United States’ declaration of war.

The 15th requested assignment to the 42nd Rainbow Division, but was curtly told that “black is not a color of the rainbow.”

While unassigned to a division, they left for training in Spartanburg, South Carolina, where the unit’s New York troopers had to deal with the South’s harsh Jim Crow system.

In late 1917, the unit went to Hoboken and embarked for France in December; after three shipwrecks, it finally made it overseas, still carrying its State flag, still designated as the 15th New York (instead of receiving a Federal number).

Although in France, the 15th was still not freed from American racism; the segregationist U.S. Army opposed black combat units, feeling that African-Americans lacked the ability to fight. Accordingly, they assigned this proud unit to labor duties.

After numerous protests, General John J. Pershing finally assigned them to combat duties — but with the French Army! Re-designated as the 369th US. Infantry, this Harlem unit began training with their French comrades, discovering to their delight that the French drew no color line.

Despite the misgivings of U.S. generals about blacks ability in combat, the 369th immediately began to run up one of the finest records in the American Expeditionary Force. The first Croix de Guerre  – a high French decoration awarded to any American –  went to two soldiers of the 369th, Cpl. Henry Johnson and Pvt. Needham Roberts, who, although wounded, single-handedly fought off a determined attack by over 25 Germans.

French leaders also praised the unit in no uncertain terms: “Experience in recent battles has shown that the bravery of all, officers and men, was admirable and worthy of the highest praise . . . with some experience, and with a bravery equal to that they have shown in recent fighting, the 36th will be equal to the finest of regiments,” wrote the Commander of Infantry of the French 161st Division, to which they were later attached.

Over 170 French decorations were awarded to officers and men of the 369th Regiment d’Infanterie des U. S. by a grateful French government, and indeed, so impressive was their record in battle that the French government awarded the Croix de Guerre to the Regimental Flag, a high honor still commemorated by the green-and-red fourragere cord still won by members of the 15th and 369th today.

The Harlem Hellfighters also gained fame for their regimental band, which introduced jazz to European audiences, and set a taste for this music that still remains today. Led by Lt. James Reese Europe, a famous band leader, composer and arranger, the band included such well-known musicians as Noble Sissle and Frank DeBroit in its ranks.

Detached from the unit, it toured all of France at the personal request of Supreme Allied Commander Marshal Foch, delighting audiences with this new style in original American music.

Led by its Band, the unit returned to New York in late 1918 and, in 1919, was consolidated with the 15th of the New York Guard that had taken its place while it had gone abroad. It returned to its original number, the 15th, and by 1920 had seen the completion of its own Armory, between 142nd and 143rd Streets and Lenox and Fifth Avenues (the original structure now serves as the ‘Hellfighters’ drill hall).

It attracted capable members, such as Major Vertner A. Tandy, New York State’s first registered black architect and the designer of Mme. Alelia Walker’s “Villa Lewaro,” and continued musical performances and contests in its Armory; at one of these, the jazz vocalist Trixie Smith was discovered. By 1930, the present Armory was completed, and the unit was commander by America’s senior African-American officer, Col. Benjamin O. Davis Sr., who left in 1940 to become America’s first black general.

It then was sent to Hawaii, its place back home being taken by the 15th Regiment of the N.Y. Guard. In the Pacific Theatre, the 369th was split into the 369th Anti-Aircraft Battalion, the 870th Anti-Aircraft Battalion, and the 726th Searchlight Battery, and again distinguished itself, especially at Okinawa, where the gunners of the 870th fought as infantry against determined Japanese attacks.

In 1974, the Harlem Hellfighters were finally re-designated to their present name, the 369th Transportation Battalion of the N.Y. Army National Guard, and in 1990, became the first major N.Y. National Guard unit to be called up for Operation Desert Storm.

The 369th’s Headquarters and its 719th and 1569th ‘Transportation Companies served in Saudi Arabia, Kuwait and Iraq, providing logistical services to the 18th U.S. Airborne Corps and to other combat units. They returned to their Amory in April of 1991, enthusiastically acclaimed by the Harlem community, and were met by Mayor David Dinkins, Congressman Charles Rangel, and Assemblywoman Geraldine Daniels.

Lt. Col. Francis Kairson, their Commander, received the Bronze Star for his services, while the entire 369th earned the U.S. Army’s Meritorious Unit Citation. The 15th of the N.Y. Guard, which had taken their place in the while the 369th was abroad, earned a Certificate of Achievement from the USS. Army for their wartime services back home.

The 369th is now commanded by Lt. Col. Anthony Spencer, a civic and community leader, who took over in February 1993, and who was raised around the corner from the Armory; he remembers how, as a child, he would sit on his fire escape and watch the Hellfighters at drill or on parades.

In over 80 years, the 369th and 15th Harlem Hellfighters have contributed more than their share to the Free World, to the Nation, to the State, and to their Community.

They were at the forefront of the battle for civil rights before it was known as such, and in their 80 plus years, have seen many changes; they now work hard to see many more.

Now they focus both on preparedness for war as well as on their State mission, that of mainly providing emergency help and humanitarian relief.

See the complete issue of Routes, A Guide to Black Entertainment May 24,1994 as PDF.