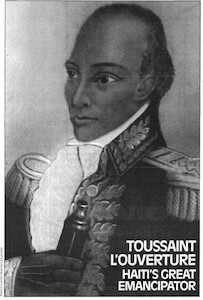 Discontent was everywhere in Saint-Domingue in 1791, and as the dog days of summer slunk across the Caribbean, it should have been clear that some blood was about to be spilled.

Of course, spilling blood was nothing new. Among the planters, farmers, managers, grands blancs and petits blancs who ruled the French colony of Saint-Domingue (what is now called Haiti), it was a way of life.

Although the Caribbean was a great place to get rich — at the time, Saint-Domingue was doing a larger and more profitable export business than the United States — the quality of mercy was in short supply.

Burnings at the stake, consumption by ants, hanging by the ears, mutilation, amputation, crucifixion and innumerable humiliations were the standard methods for subduing slaves.

But in August of 1791, there was a new kind of tension in the air, what we might now call the sound of chickens coming home to roost. The king of France, Louis XVI, (ironically, one of the few Europeans interested in assuring decent treatment for Haiti’s captive people) was in jail, with only a year and half to live.

The colonists, having been stung by the revolutionary bug, were agitating for the same kind for independence from France. Given the recent birth Lieutenant Governor Toussaint L’ouverture in 1801 reading the Constitution of the Republic of Haiti, of the United States and the spreading chaos in the French republic that independence movement could become a big problem.

In order to neutralize the threat the French Government was about to employ the tried and true strategy of destabilization: by stirring up the African and Creole populations, the loyalist National Assembly hoped to scare the colonists into toeing the line.

A plan was hatched at the Brada plantation near Cape Francois, wherein some charismatic leader would instigate an uprising among the slaves; but just as chaos seemed imminent, government troops would step in, crush the rebellion and restore order, thereby winning back the loyalty of the relieved plantation owners.

There was even a provision made for faking the attack against the rebels and assuring their surrender. In exchange for their cooperation, the rebellion’s leaders would be free; the troops would be lucky enough to get an extra day off per week and a reprieve from the lash.

In its way, it was an elegant scheme, a Machiavellian plot of the first order. All that was needed was a straw man, a charismatic nemesis to lead the rebellion.

And the magnificent twist of history is that the National Assembly chose as its puppet leader a man who could turn the tables on the puppeteers, a Machiavelli with more surprises than a Christmas tree, more real revolutionary spirit than Jefferson and Robespierre combined.

Francois Toussaint, soon to be known as Toussaint L’ouverture for his ability to find openings in enemy lines, had spent the first forty-seven years of his life in slavery, but he would spend the remaining twelve changing the course of history, controlling and being controlled by the great events around him, and opening the doors of freedom to the people of Haiti, and to people everywhere.

By the time of his death, April 7, 1803, Toussaint L’ouverture would become Haiti’s George Washington, its Abe Lincoln and its Nat Turner.

Haiti would be remade from an enslaved colony into a free republic, (though admittedly still a republic “protected by France”). If one man did more to ensure Haiti’s emancipation — seventy years before the United States’ — it is Toussaint L’ouverture.

François Dominique Toussaint was the eldest boy of eight children born to a slave woman named Pauline and Pierre Baptiste Simon, a free descendant of the Arada tribe. Employed at the Breda plantation, Pierre was something of a curiosity; while working with the Jesuits in his childhood, he had learned to read and write, acquired a little Latin, and converted to Roman Catholicism,

He passed his faith on to Francois, who grew up a devout Catholic, shunning voodoo. Few of Francois Toussaint’s peers were Catholic; whites in Haiti gave little attention to the religion of the slaves. Their chief concern was the suppression of voodoo, especially of a popular song,

Which translates to:
“We swear to destroy the whites and all they have;
We swear to do this or die.”

Like his father, Francois Toussaint also learned to read and write. But he was always more comfortable with the Creole patois, and his French was shaky at best. Thus Francois grew up at the fringes of several cultures.

Though he was both a slave and an outdoor worker, he seems to have been spared many of the hardships and cruelties that such a life entails. Though he spent large portions of his public life fighting against the French, he considered himself to some extent a Frenchman.

Was it this background that allowed Toussaint to act with such flexibility? Whatever the reason, he revealed an uncanny ability to play both ends against the middle.

That was the right ability for a man in Toussaint’s position. The rebellion that began on the French drawing boards quickly spun out of control, became conflated with other, smaller and larger rebellions in the colony, and revealed thousands of fault lines.

But Toussaint’s first act of leadership was foremost an act of mercy. While the slave revolution burned, taking with it over 1,000 plantations and thousands of lives from every “race,” Toussaint stayed at the Breda farm, using his influence to protect the property and the lives of his former boss’ family.

When it became clear that he could no longer protect his charges, Toussaint escorted them to the Spanish colony and then reported to a plantation at Gallifet where the revolution was being commanded by Jean-Francois and Biassou.

As revolutionary men, the commanders left something to be desired, and while Toussaint worked for them with enthusiasm, he quickly spotted that the army needed something more. The commanders augmented their fancy titles with lovely uniforms and cavalry uniforms, while the troops wore rags, loincloths or stolen clothes and carried machetes, sticks or knives.

Although it is generally believed that both JeanFrancois and Biassou were appointed by the government and received money from French and Spanish sources, weapons had been purchased for only a third of the troops, who had no training anyway.

Toussaint gave his energy to the grueling task of training an army. With assistance from captured officers, he devised a system of tactics that was part-Clauzwitz and part Ho Chi Minh. He reined in the appetite for revenge and laid down the law, by force when necessary.

Years later, the chief of staff of Napoleon’s expeditionary force would testify to the discipline of the troops: “Never was a European army subjected to severer discipline than Toussaint’s. Officers commanded pistol in hand and had the power of life and death over their subordinates.”

“It was remarkable to see these Africans, the upper part of their bodies bare and equipped only with an ammunition bag, a sword and a musket, give the example of strictest self-control. Returning from a campaign during which they had lived on a few ears of com, they would, when quartered in a town, not touch any of the provisions exposed in the shops.”

In 1793, Toussaint and Biassou were leading the slave revolution, having broken off from Jean-François and allied themselves with the Spanish in neighboring Santo Domingo (today, the Dominican Republic). By this time, Toussaint began to see that the road to independence lay not in purchasing his own freedom, not in getting the French government’s guarantees of civil rights for mulattoes, but in smashing the chain forever, achieving emancipation for all people in Haiti.

But what Toussaint had most was political acumen, the ability to stay afloat in the sea of disputes: disputes between royalists and republicans, colonists and separatists, rich whites and poor whites, planters and mulattos, British and French, French and Spanish, mulattos and mulatto leader Rigaud.

By the time Napoleon rose to power, Toussaint had overrun the Spanish colony and freed its slaves, becoming leader of the entire island.

There isn’t space here blacks. The colony was dissolving into infinite shades of meanness, and Toussaint needed more than just savvy to achieve his ends.

Sometimes skepticism served best. After long and complicated parleys between the black army and the Civil Commissioners Polverel and Sonthonax, emancipation was declared for the entire black population in 1793,

But Toussaint refused to go along, correctly divining that the commissioners’ power was limited and the emancipation was at least partially intended to enlist the blacks against the new governor, General Galbaud, Toussaint threw in his lot with the Spanish.

At other times Toussaint showed considerable flexibility. Since the French were in trouble, and that the biggest dangers might be coming from outside, he accepted the emancipation proclamation in 1794, and smoothly switched sides, defeating the Spanish and British, and becoming lieutenant governor in the process.

A few years later, he saw a way to get rid of the British by negotiating a separate peace even though his own country was still at war with Britain. This began a period of lucrative trade with Britain and the US that helped build the Haitian economy.

And at times he used the ability to wipe out his rivals. He maneuvered out the governor Etienne Laveaux, and forced Sonthonax to leave a few years later. Next went the replacement governor Hedouville and the to recount the complete adventures of Toussaint L’ouverture, or even to hit the main events.

The end came after the continuing suspicions of Napoleon led to an expedition to the island of General Leclerc, during which the mulatto leaders and even some of Toussaint’s own generals, went over to the other side.

It was a massive invasion and Toussaint agreed in May 1802 to cease fighting, provided the abolition of slavery would remain in effect. A few months later he was arrested for conspiracy and sent to Fort-de-Jeux in the French Alps, where he died In 1803.

But what makes Toussaint’s story so compelling is not the simple history, but the ambiguity at its center.

Toussaint was not a perfect hero; he could be duplicitous and even harsh at times. But this was the tenor of the age: there was nothing black and white in Saint-Domingue.

The story is bound up with the complicated rivalries of the European powers, with the mutual resentments of the different white classes, and most tragically, with the politics of miscegenation that plague Haiti to this day.

Interestingly enough, though he always hoped for emancipation of all slaves, he came to the cause of freedom gradually, pragmatically, in an age of revolution, the true genius of Toussaint L’ouverture may be that he knew how to play politics while holding up an ideal of equality for all.

In this sense, Toussaint L’ouverture may be the first truly democratic leader of modern history.

See the complete issue of Routes, A Guide to Black Entertainment July 1978 as PDF.