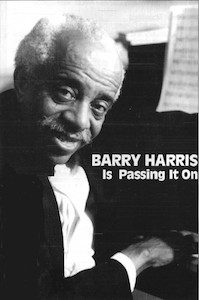 New York’s Symphony Space, at 95th Street and Broadway, is a former movie house with an unassuming facade, but great things are known to take place within. Last month, audiences had a special treat when pianist Barry Harris brought onstage his 150-member Ensemble, and conductor Coleridge-Taylor Perkinson. There is something for everyone at a Harris concert; one might hear an adult chorus, an orchestra with strings, featured soloists, singers, and diverse dancers, and singers–all performing in the Jazz idiom, because that is the music to which Barry Harris has devoted a lifetime.

Of course, today’s economy makes such productions prohibitive, but Barry Harris is a determined man whose concert events have been an ongoing tradition since 1978. Perhaps the aspect that is closest to Barry’s heart is the Children’s Chorus, which was founded in 1980 by one of his students, Lennie Azzarello, almost as a fluke. A music teacher in the New York City public schools, Azzarello was coaching a group of students from Franklin Roosevelt High School for a forthcoming Barry Harris concert, but the rehearsals were not going well. Barry’s suggestion that the children might respond to jazz lyrics worked so well that the Franklin Roosevelt High School group became the core of the Children’s Chorus, and a regular feature of all subsequent concerts. This year’s Children’s Chorus director is Randolph Noel, a former Harris student and director of The Noel Singers. The concert, whose theme was “A Lovely Way to Spend An Evening,” was dedicated to the late saxophonist, Clifford Jordan. Other featured guest soloists included: pianist Chris Anderson, saxophonists Roland Alexander, Charles Davis, David Glasser, and Jimmy Heath; dancers David Gilmore, and Scoby Stroman; and Roberta Davis, a jazz singer from Minneapolis who, although physically ill, presented her material with the aplomb of a veteran performer.

Barry Harris first came to New York, briefly, in the mid- Fifties, then returned with Cannonball Adderley in 1960, and was persuaded to stay. At that point, he was already an established teacher and performer in his hometown, Detroit. His mother was his first piano tutor, starting him off in 1933, when he was four. It was during his high school years that he first became fascinated with jazz; he was already a church pianist, so there was a decision to be made. “What are you going to do, play jazz or church music?,” his mother asked. He opted for jazz and received her full support, even allowing him to bring home for practice such friends as Paul Chambers, Doug Watkins and Donald Byrd, all of whom would become firmly established on the jazz scene. Barry recalls that his house was like a classroom.

Detroit was a hotbed for young jazz talent in the Forties and Fifties, including fellow pianists Hank Jones and Tommy Flanagan. The city’s large African-American population also attracted visiting players, and at such spots as the Blue Bird Club and the Rouge Lounge-Barry had the opportunity to play with the likes of Lester Young, Sonny Stitt, Max Roach, Miles Davis, Yusef Lateef, Benny Golson and Johnny Griffin.

After six months in New York, Barry left Cannonball’s group, to venture on his own; the recordings he made for the Riverside label are now available on CDs, and eagerly sought by a new generation of jazz fans. As he established himself on the New York and international music scenes, he resumed the teaching activities, giving valued instruction to such “youngsters” as trumpeter Lonnie Hillyer, saxophonist, Charles McPherson, and pianist, Kirk Lightsey. He also conducted music workshops at various New Y ark locations, including an early series sponsored by Jazz Interactions. When that sponsorship ended he continued on his own, preferring the workshop format over the class for the individual student.

Later, he and partners Jim Harrison, the late Frank Fuentes, and bassist Larry Ridley conceived of a place that would provide the space for musicians to study and perform music, as well as replicate the kind of nurturing environment young artists tend to thrive in—an atmosphere similar to the one in which Barry and generations of Detroit musicians had blossomed during their formative years.

In 1982, the Jazz Cultural Theater opened its doors in a little storefront on 8th Avenue in Manhattan’s Chelsea are. The spot immediately became the “in” place for music students, professional musicians and jazz aficionados. For the next five years, it also became a mecca for many foreign students and Americans on spring or summer break. The beauty of JCT as it was called, was that it melded all ages, classes, cultures, ethnicities, genders and levels of musical involvement into a perfect whole. Sadly, it fell victim to one of New York City’s silent blights-an exorbitant rent increase-in August of 1987. Its closing was a true blow to the New York jazz scene.

In over 50 years in the music business, Barry Harris has made his mark, not only as an internationally famous performer and composer, but also as a teacher, arranger and jazz activist. He appears to be very content with this balance of activities, and if there is a common thread other than jazz, it is perhaps that he cares so deeply for the music and the people who create it. He is a keeper of the flame, and that fact did not escape the makers of a recent documentary celebrating his extraordinary talent-they called the film “Passing It On.”

At the 1988 annual Thelonious Monk Piano Competition, Barry Harris-a judge since 1987-showed a typically warm side of his personality. A teenage contestant, who had captured the audience’s imagination with his joyful, infectious playing, did not make it as a finalist. At the close of the event, he was seen seated on an out-of-the- way staircase, alone and downcast. Next to him sat Barry Harris, quietly speaking words of comfort.

Barry Harris’s achievements are as impressive as they are numerous, so he is quick to honor those of others hence “The Barry Harris Achievement Awards,” which have been given to outstanding musicians at the annual concerts since 1988. The concept behind the “Barry,” as it is called, reflects the man himself, a man whose tireless efforts to nurture new talent will be enjoyed by generations of jazz lovers for many years to come.

Here is also a pdf version of this issue