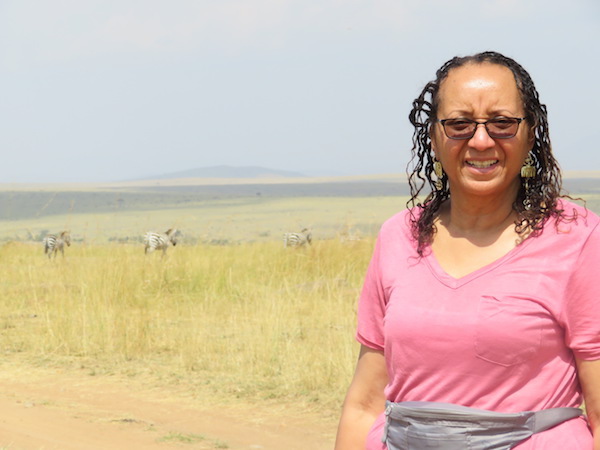 I have always been intrigued with Africa. But my interest really peaked when I casually asked a friend, who traveled internationally for work, “which place, of all the places you’ve visited was the most exciting?”. Her answer surprised me. “Nairobi”, unhesitatingly, she said . Not Paris. Not Rio. Not Tokyo, but Nairobi! Needless to say, my curiosity was, from that moment on, heightened and I became obsessed with seeing this place my dear friend had crowned her favorite city.

In mid-July of this year, my daughter-in-law, Adenah (a resident of Atlanta) and I, fulfilled my long-awaited dream to travel to Kenya. We have American friends who moved to Nairobi a few years ago. We stayed at a modest hotel, not far from them, so we could easily visit with them and site-see the city they knew and loved.

Our travel time from New York City to Nairobi was 16 plus-hours, not including the two hour layover in Amsterdam. It’s not a wonderful feeling being stuck in an airplane for such a long time, but for the chance to see Kenya, the associated stress was worth it.

July is the peak tourist season in Kenya, largely because it’s much easier to see herds of animals as they roam to find water. July is also the coolest month of the year: temperatures, at night, dip as low as the mid-50s; while during the days, the temperatures are generally a perfect 75 to 80 degrees.

Metropolitan Nairobi is the 5th largest city in Africa, with a population of 6.5 million. Only Lagos Nigeria, Cairo Egypt, Kinshasa Congo and Luanda, Angola boast larger populations. The Nairobi we came to see was unlike what I had pictured it to be: heavily populated, bustling traffic, not modern, very poor—the culturally deprived place that Westerners envisioned all of Africa to be. In fact, Nairobi is not unlike New York City. It has a popular national museum, beautiful parks, restaurants, shopping malls aplenty, fashion boutiques, and, not so different endless traffic. We saw young men bravely weaving through the bumper-to-bumper traffic hawking items for sale: from chef hats to handmade potato chips. A dangerous way to make a living, but for many, a necessity .

We lunched at local shopping malls and it was in these places that I became impressed with the beauty of Kenyan women. Most of them displaying beautiful intricate braided styles. They were also, for the most part, slender and fit—not obese like many women in the States. The women wore stylish Western outfits, not traditional African print garb one often sees in West Africa. This was East Africa. Very different from the countries Senegal and Burkhina Faso, which I had visited many years ago.

Kenyans drive the same make and model cars that Americans drive. Most people, however, use the privately-owned and operated jitney buses for transportation to and from work; while others forego the extravagance of riding and simply walk—sometimes great distances—because finding a job in Kenya can be very difficult for most and salaries are not very high. There were security guards everywhere, checking car trunks and looking inside the backseat of cars. Kenya had, a few years back, a fatal incident in one of its popular shopping malls where a number of shoppers were killed. And with elections not far off, the political climate was at a fever pitch. Politicians running for virtually every possible office, campaigning vigorously on television, or, their faces emblazoned on billboard ads and posters.

The highlight of our trip was the 3-day/2-night Safari to the famous Maasai Mara National Reserve. Best known to Americans as the site of TV’s “Big Cat Diary”, the Mara, is also famous for the annual great wildebeest migration. The wildebeest journey north from Tanzania’s Serengeti Reserve to Kenya’s Maasai Mara National Reserve where grass is more plentiful. The Kenyan government forbids hunting animals unlike some countries like Tanzania, and thus the wildebeest and other herds are plentiful in the Mara as well as Kenya’s other national parks. But it is the Mara which offers the nutritious grass that the herds seek.

After a very long, but scenic seven-hour drive from Nairobi, through the city’s wealthy Karen neighborhood, past Nairobi’s notorious slum with its shanty houses, and then through the steep terrain of the Great Rift Valley—a natural geological split in the earth that extends from Lebanon in the Middle East to Mozambique, we camped at a small tented site near a traditional Maasai village.

From the first afternoon in the Mara, we saw so many beautiful animals grazing or relaxing on the Mara plains. We rode in a van that had a detachable roof, enabling us to see the giraffe, water buffalo, and antelope live and in living color, making photographing these beautiful animals so much easier. Our tour guide, Charles, explained that the mating lions, surprisingly nonchalant about the numerous people in safari vans surrounding them, were young lions. A healthy looking female, possibly the matriarch of the pride, sat majestically on a large rock overlooking the younger female mating with the young male, whose mane was sparse and not yet black. Not far from the lions, two beautiful cheetahs were winded from a run to capture a Thompson gazelle, that lay mangled and bloodied a short distance from the two cats. A short distance away from the mutilated gazelle, we strained to view a leopard perched atop a thick branch. It took a while to actually focus on the leopard through the thick foliage, but there he was perched on a branch surrounded by a dozen safari vehicles. He appeared unfazed by his notoriety. Eventually we happened upon a small herd of elephants, searching for food. This would be my only opportunity to see these magnificent creatures on this trip because the grass was very dry. Charles explained that the elephants had probably moved on to higher ground for more lush vegetation.

The second Safari day began with Adenah and me fending off a dozen very aggressive Maasai women who were selling souvenirs and red plaid cloth, the Maasai’s “go to” garment. Maasai families depend on these sales for their survival, so the women’s aggressiveness with wealthy tourists is understood. But despite purchasing a few items there was still no relief from the Swahili-speaking women’s aggressive sales techniques. Charles had to rescue us from the women before driving us farther south to the Mara River, a good two hour drive over rough terrain. At the river, lounging peacefully on the river banks was a herd of about seven hippopotamus, including a precious little one, tucked close to his mother. Not far from them lay a couple of horrible looking crocodiles with their wide mouths agape. Unlike the more angular snouts of American alligators, these crocs had thick, rounded snouts. The Mara River is also where the hundreds of wildebeest congregate as they make their infamous crossing—heading south to Tanzania’s Serengeti National Park. But the day we visited, the wildebeest and zebra didn’t cross the low lying river, but instead turned and headed back north. The reason could have been due to the numerous tourist vehicles blocking their passage. The crossing would occur on another day and unfortunately we would miss it.

The last night in the Mara, Adenah and I were treated to a tour of the local Maasai village. The village leader explained, in well-spoken English, that they lived on the cows they herded: eating the meat and drinking the cow’s blood. These same cows, he said, “Were often stolen by the lions and hyenas coming from the Mara”—a distance of only a few miles. The Maasai warriors are prohibited from shooting lions with guns. The men take turns guarding their herds each night, using spears and daggers to fend off the hungry lions. Learning how frequently lions ventured into the area made us a little nervous and our fear only intensified when, on that same night, we heard the laughing of hyenas situated not so very far from our encampment. Our fear was abated, somewhat, when we caught glimpses of  Maasai warriors’ flashlights as they patrolled throughout the night.

When we returned to Nairobi, Adenah and I visited the David Sheldrick Wildlife Trust—home to 26 precious baby elephants and one black rhino named Maxwell. At the baby elephant orphanage, we got to pet the rough, dry hide of the babies and watch as the keepers bottle fed them milk. The elephants, while cute were very rambunctious! We tourists were separated from them by only a thin rope, so when the elephants came barreling over to the crowd of onlookers, everyone backed away quickly for fear of being stepped on. The caretakers related tragic stories about how the babies were brought to the orphanage—victims of poaching that killed their mothers. After hearing these horror stories, most visitors feel compelled to contribute something to the orphanage (www.sheldrickwildlifetrust.org). Maxwell, a 5-year old black rhino, also lives at the orphanage. Sadly Maxwell is blind, so unlike the baby elephants who are eventually returned to the wild, Maxwell will live out his days at the orphanage.

Our trip was a mere 7 days, but I will never forget “My Dreamed Visit to Kenya—Fulfilled” and I plan to return there soon. I fell in love with Kenya and in particular, the magnificent creatures that I saw. 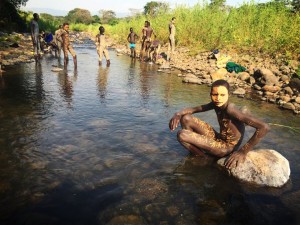 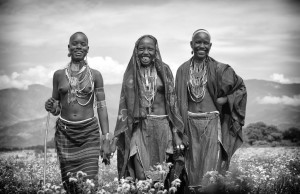