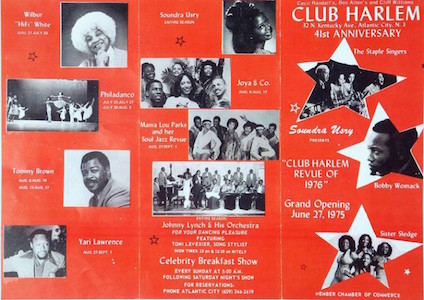 Years ago, Kentucky Avenue was the center of night life in Atlantic City. Music flowed from the clubs on both sides of the street starting Memorial Day and ending on Labor Day. 32 North Kentucky Avenue was the home of Club Harlem, the most famous club in Atlantic City. Club Harlem was a bar and performance space that showcased African-American talent in the city for more than 50 years.  In 1935, Leroy “Pop” Williams and Cliff Williams purchased Fitzgerald’s Auditorium, a dance hall. The father-son duo transformed the hall, re-opening it as Club Harlem – its name referring to the vibrant black community in New York City.

Club Harlem was an ample space that accommodated 900 customers and housed two bandstands, on which alternating acts would perform for an always packed house. During the summer, music began on Saturdays at 10 pm and wouldn’t stop until 6 am on Monday morning. Four shows played on Saturday and Sunday nights: 10 pm, 12 am, 2:30 am, and the famous 6 am breakfast show. Oftentimes, headlining acts from Steel Pier or the 500 Club would finish their sets and head over to Club Harlem to play impromptu gigs. Frank Sinatra, Milton Berle, Duke Ellington, and Lenny Bruce all played unscheduled performances at Club Harlem.

On Kentucky Avenue is a true celebration and tribute to Atlantic City’s famed Club Harlem. The setting is the 1969 season opening night dress rehearsal. A ‘love triangle’ develops between the MC (Ivan King), the lead show girl and the featured female vocalist.

The show has an original score true to the era interspersed with classic songs from the 1960’s. This show brings you back to a time when nightclubbing was in vogue with leggy showgirls, comics, specialty acts and great singers & dancers reigned supreme.