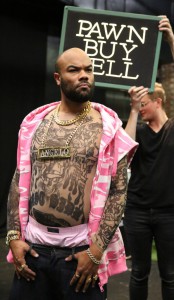 The Public Theater’s MOBILE SHAKESPEARE UNIT, part of The Public Theater’s long-standing commitment to making Shakespeare accessible to all, returns for its sixth year with THE COMEDY OF ERRORS. Mistaken identity leads to delightful mayhem in the Bard’s classic play about two sets of twins separated by stormy seas. When one pair dares to trespass into a foreign city to find the other, the comedy of errors begins and the long-lost brothers must overcome wrongful imprisonment, angry wives, and hilarious confusion on their journey to a joyful reunion.

MOBILE SHAKESPEARE UNIT, now in its sixth year, is a reinvention of Joseph Papp’s Mobile Shakespeare program, which began in 1957 to bring Shakespeare to the masses, evolving into the New York Shakespeare Festival and ultimately becoming The Public Theater. Recent Mobile Shakespeare Unit productions include Measure for Measure; Richard III; Much Ado About Nothing; Pericles, Prince of Tyre; and Macbeth. MOBILE SHAKESPEARE UNIT will also present educational workshops at selected tour venues, expanding The Public’s existing community outreach and education program. This program continues the expansion of The Public’s Shakespeare Initiative, which includes the recent Public Works productions of The Odyssey, The Tempest,and The Winter’s Tale staged at the Delacorte Theater for free; Free Shakespeare in the Park; and The Public’s other affordable productions at its downtown home at Astor Place, all reinforcing the Company’s commitment to the ongoing exploration of Shakespeare’s canon.

KWAME KWEI-ARMAH OBE (Director) is an award-winning British playwright, director, actor, and broadcaster. At The Public, he has directed the Mobile Shakespeare Unit production of Much Ado About Nothing and the Public Lab production of Detroit ’67. He is currently the Artistic Director of Baltimore’s Center Stage and most recently he wrote and directed the World Premiere of Marley, a musical based on the life and legacy of Bob Marley. At Center Stage he also directed One Night in Miami, Amadeus, dance of the holy ghosts (City Paper Top Ten Productions, 2013); The Mountaintop; An Enemy of the People; The Whipping Man, for which he was named Best Director; and Naomi Wallace’s Things of Dry Hours. In 2014, he was named Best Director in City Paper’s Best of Baltimore, and was a finalist for SDC’s Zelda Fichandler Award for Best Theater Director. Among his works as playwright are Elmina’s Kitchen and Let There Be Love as well as A Bitter Herb, Statement of Regret, and Seize the Day. Beneatha’s Place debuted at Center Stage in 2013 as part of the groundbreaking Raisin Cycle. His other directorial credits include Dominique Morisseau’s Skeleton Crew at the Lark Play Development Center and the World Premiere of The Liquid Plain at Oregon Shakespeare Festival and its New York Premiere at Signature Theater. He has served on the boards of The National Theatre and The Tricycle Theatre, both in London, and as Artistic Director for the World Arts Festival in Senegal. He was named the Chancellor of the University of the Arts London, and in 2012 was named an Officer of the Most Excellent Order of the British Empire.