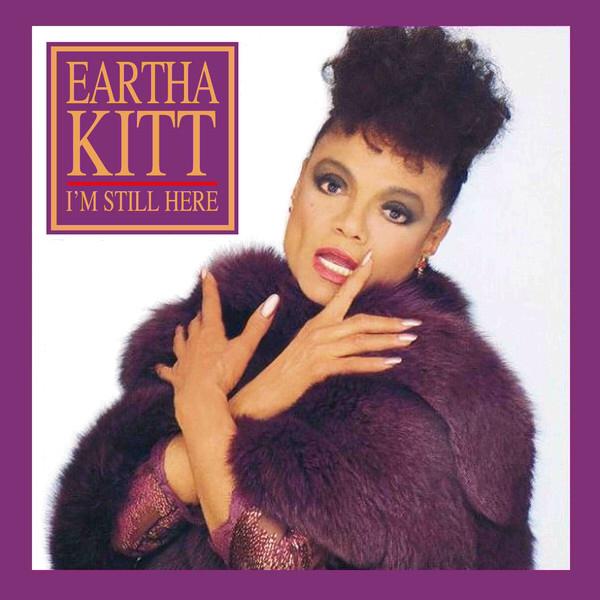 “Many men wanted to lay me down, but few wanted to pick me up.”
—Eartha Kitt

The tantalizing tease…the seductive strut…the bewitching come-hither look…the low, raspy voice…and of course, her signature purr-r-r-r-r. That was, unmistakably, the indomitable Eartha Kitt. An African-American dancer, singer, actress, cabaret entertainer, comedienne, and social and political activist, Kitt was best known for her sensual recording of the enduring holiday song “Santa Baby”, and her portrayal of Catwoman in the campy 1967 Batman television series. A stage, television, film, and recording star, Kitt replaced the statuesque actress, Julie Newmar, in the vixen role, during the series’ third and final season. Kitt was the first African-American actress to play Catwoman, and although she was featured in only three episodes, she was, no doubt, the most memorable feline femme fatale of them all. When she was offered the role of Catwoman, Kitt often said in interviews, that there was no need to prepare for the part, because, after all, she had been born “two parts cat, and one part woman”. But there was so much more to this deeply complex and dynamic woman, than Catwoman. So, who was Eartha Kitt? And why did so many African-Americans find it hard to embrace her? Well…purr-haps, Miss Kitt was simply, misunderstood.

Eartha Mae Kitt was born in abject poverty, on a cotton field plantation, in Orangeburg County, South Carolina, on January 17, 1927, and named “Eartha”, because it had been a very good year for crops. She was raised by Annie Mae Kitt, an African-American and Cherokee Native-American woman, whom Eartha thought was her mother. Unfortunately, Kitt never knew who her father was, but always held that she was a product of rape, and that the rapist was the son of the white plantation owner where she and her mother picked cotton. At age 6, she was given away to relatives who abused and taunted her as the “yella gal”. She was often told that no one wanted her because she was a motherless bastard, “not black enough to belong to blacks, and not white enough to belong to whites”. However, her life was saved by the “good church people” who contacted her aunt in Harlem and told her that if she did not send for Kitt, she would soon be worked to death, beaten to death, or starved to death by the abusive family she’d been given to. At age 8, she was sent to live with her “aunt” Mamie in Harlem, only to later learn that Mamie was, in fact, her biological mother who had abandoned her at birth. Kitt was enrolled in the New York School of Performing Arts, and at age 16, on a dare, auditioned for, and won a full scholarship to study at the Katherine Dunham School of Dance. She toured internationally with the Dunham troupe before starting her solo career as a cabaret entertainer in Paris.

In 1952, Orson Welles cast her as Helen of Troy in his European production of Dr. Faustus– a role that opened doors for her to the American stage. Throughout the 1950’s and 1960’s, Kitt worked regularly on stage, in film, television, and in nightclubs. New Faces of 1952 made her a bonafide Broadway star, followed by Shinbone Alley( 1957), and Jolly’s Progress (1959). In 1954, Kitt was nominated for a Tony Award for the coveted role of Teddy in Mrs. Patterson. Then she landed a 5-year recording contract with RCA, releasing such international hits as “C’est Si Bon”, “I Want To Be Evil”, “Just An Old-Fashioned Girl”, and “Santa Baby”. Her most notable films include: The Mark of The Hawk, working opposite Sidney Poitier, 1957; St. Louis Blues, with Nat King Cole, 1958; and with Sammy Davis, Jr. in Anna Lucasta, 1959. In 1960, she received her star on the Hollywood Boulevard Walk of Fame, and in 1982, Eartha and her daughter, Kitt, made a documentary entitled All By Myself: The Eartha Kitt Story. Later stage performances include Timbuktu!, The Wizard of Oz, The Wild Party, Nine, and Cinderella. She performed her cabaret act in such landmark venues as The Ballroom, Cafe Carlyle, and The Persian Room. Kitt wrote three autobiographies: Thursday’s Child, 1956; Alone With Me, 1976; and I’m Still Here: Confessions Of A Sex Kitten, 1989. During a career that spanned more than 6 decades, she toured more than 105 countries, and sang in 9 languages.

Eartha Kitt achieved a level of crossover popularity that was rare for female African-American entertainers of her time. Her uninhibited sexuality made her fascinating and appealing to both black and white men, and while popular with both audiences, she was never fully embraced by either. Many of her television, stage and film roles were performances that were usually reserved for white actresses, but as a tri-racial African-American female performer, Kitt was, for the most part, regarded by the white media, as the defacto “tragic mulatto”. On the other hand, the African-American community viewed her as a curiosity–a temptress of “mixed heritage”, who was unabashedly sexual at a time when the African-American community sought to suppress its sexuality. She had an unusual demeanor, spoke with a strange accent, and had been involved in several highly publicized interracial relationships. Also, she married and had a child–Kitt–with John William McDonald, a white real estate investor. Indeed, Kitt’s high-profile relationships with white men did a lot to forge African-Americans’ opinion of her, and of her self-perceived identity, as many felt that she shunned black America and identified more with white America. As a result of this perception, Kitt was, to an extent, criticized by the black media and the black community.

This writer contends that, regardless of her interracial background, Kitt did not have an “identity problem”. The confusion, perhaps, might be found in the eyes and minds of the beholders. Eartha Kitt was, obviously, quite comfortable in her own skin. And if ever there was any doubt about who, or what she was, she had only to look into a mirror. She may have been haunted by ghosts from her brutal childhood, but as Kitt so aptly stated in a 1978 Detroit Black Journal interview with Ron Scott, she had “always known who and what she was”. And what she was, I suspect, was a “cat” caught between two separate and very unequal worlds—one, white and privileged, and the other, black and disadvantaged. Remember, it was the violence of rape, in the first place, that created Kitt’s interracial conception–of duality—a condition that subconsciously forced society to place her in the realm of “otherness”– neither black nor white. While white America projected Kitt as “black, but not too black”, black America perceived her as “light, bright, and damned-near white”. But in the eyes of both Americas, Kitt, like other ”tragic mulatto” entertainers, were emblematic of this purposely defined “otherness”. Orson Welles called Kitt “the most exciting woman in the world”, and cast her as Helen of Troy in Dr. Faustus, because he thought she represented “all women of all times”.

As for shunning the African-American community, I believe that Kitt was as committed to “the cause” as much as, if not more so, than any other African-American performers of her day. While living in Paris, her close circle of friends included James Baldwin, Richard Wright, Oscar Peterson, and her role model, Josephine Baker. During the Civil Rights Movement, she grew an afro and marched alongside Dr. Martin Luther King, Jr. She took her show uptown to the Apollo Theater, and donated every penny she made from the Apollo audiences to Dr. King’s peaceful movement, because she believed in his dream—equality for everyone. Kitt also gave generously, but quietly to African-American communities, and did so, long before it was popular for black celebrities to be acknowledged publicly for their community services. From Harlem, to Watts, and on to Southeast Washington, DC, Kitt had, for many years, concentrated her time, energy, money, celebrity, and contacts in black ghettos, working particularly with youth organizations—fundraising, opening self-help community centers, purchasing buildings earmarked for juvenile safe havens, removing locks from schoolyard playgrounds so that kids had safer recreational environments, getting hot water for tenants who had gone for years without hot water, getting broken parks and sidewalks paved, and opening dance schools in Harlem and Watts for inner city youths, where she provided free meals for children, and gave free dance classes.

What is most interesting, however, is not the amount or extent of community services that were rendered by Kitt, but the fact that she did not seek any publicity for her community services, choosing instead, to give back to the black community, privately, without fanfare, or the need of obtrusive media attention. As a matter-of-fact, it was because of the community work Kitt had done with Rebels With A Cause, a popular Washington, DC- based youth organization, that she was one of 50 American women invited to a special White House Luncheon, hosted by First Lady, Lady Bird Johnson, in 1968. During that luncheon, Kitt engaged in a heated debate with Mrs. Johnson over the nation’s racial inequities, failing schools, high unemployment, sub-standard housing, and America’s involvement in the Vietnam War. She supposedly made The First Lady cry, and as a result, Kitt was investigated by the CIA and the FBI, and blacklisted by President Lyndon B. Johnson’s Administration for over 10 years, forcing her to find work outside the country. She was welcomed back to the USA by President Jimmy Carter in 1978, during a command performance of Geoffrey Holder’s Timbuktu!, in which she played Queen Sahleem-La-Lume.

I had the pleasure of meeting Ms. Kitt briefly after an amazing performance at Cafe Carlyle many, many years ago. A birthday gift from my late husband, Giancarlo Santini, who also adored her, she very graciously wished me a Happy Birthday, then winked at my husband and said: “And you..are one very lucky man!”

Eartha Kitt was many things—bodacious, defiant, fearless, seductive and extremely talented. She had a reputation for being blunt and sharp-tongued–never afraid to speak her mind, or tell the truth—even if it meant paying a heavy price. And she did. With her beloved daughter Kitt by her side, Eartha died on Christmas Day, December 25, 2008, but her indomitable spirit lives on…

Sandhi Smalls Santini
A native of Edisto Island, South Carolina, Sandhi Smalls Santini is a New York City-based writer and performing artist. She received her B.A. in Journalism and Theatre Arts from Howard University, Washington, DC, where she was features staff-writer for THE HILLTOP, the university newspaper. Subsequent studies were obtained in Human Rights from Columbia University Graduate School of Arts & Sciences, NYC; and The Playwriting Program at Woodie King Jr.'s New Federal Theatre, NYC. She is a member of SAGAFTRA; The League of Professional Theatre Women, NYC; and The Society For The Preservation of Theatrical History, NYC. The author of two books, "EDISTO ISLAND: Seaside Stories From A Geechee Gal" and "Poetry and Prose On A Platter", she is copy editor and features writer for ROUTES MAGAZINE: A Guide To African American Culture.
Latest posts by Sandhi Smalls Santini (see all)

Sandhi Smalls Santini 4 years ago
Do NOT follow this link or you will be banned from the site!