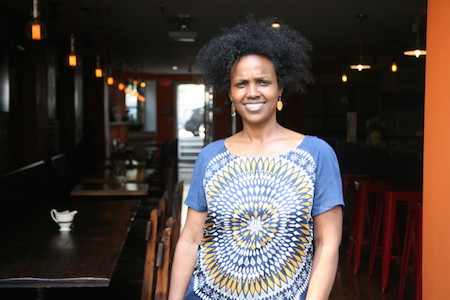 The owner of a popular, new Ethiopian restaurant in Harlem, Tsion Café and Bakery, has never forgotten her roots even though she was only four years old when her family left Ethiopia. “We were one of the first Ethiopian families to migrate to Israel,” said Beejhy Barhany. Contrary to what most people believe about Ethiopia — poor, underdeveloped – “we were doing fine but our deep love of the Holy Land beckoned us,” she explained. Her family left Ethiopia, not as part of Operation Moses when thousands of Ethiopian Jews were airlifted out of Ethiopia and Sudan to Israel in a mass resettlement, but on their own. Beejhy (pronounced Bee-Jay) arrived in Israel at the tender age of seven. Fifteen years ago she left Israel and moved permanently to New York.

Foremost for Beejhy was finding a way to expose the richness of her native land and her people to others. Five months ago she opened Tsion Café and Bakery in Harlem, nestled in the historic Sugar Hill section of Harlem, in a locale familiar to Harlem residents as the former home of Jimmy’s Chicken Shack where Malcolm X washed dishes and Redd Foxx performed his comedy. More than your traditional eatery, Beejhy explains the thinking behind making her restaurant stand out. “Our mission is to promote the culture of Ethiopia by showcasing the cuisine, music, art, poetry and film of my homeland” says Beejhy. With the scrumptious meal of authentic Ethiopian cuisine in this warm and friendly sanctuary, customers also get an introduction to the history and lifestyle of Ethiopia.

This deep rooted passion about Ethiopia and Ethiopian Jews evolved in 2003 and led to the founding of the organization BINA (Beta Israel of North America). For the past 12 years, under the auspices of BINA, Beejhy has sponsored the Sheba Film Festival in the month of May. Until this year, the documentaries were shown at venues such as the Schomburg or the 92nd Street Y. Now the movies are shown at Tsion. Transformed into an intimate movie theater when Beejhy pulls down a large movie screen and introduces the movie for the night, the movies, as well as the food, have attracted a loyal following to the cafe.

The last film shown at this year’s Sheba festival was “Asni” a biopic about Ethiopia’s most renown – but controversial – singer and actor, Asnaketch Worku, considered Ethiopia’s Edith Piaf or Billie Holiday. Another documentary featured during the film festival was “Village of Peace” about Israel’s Black Hebrew Israelite community, a group of expatriate Black Americans who journeyed to Liberia West Africa in the 1960s before settling in Israel where they have lived for over 40 years. The film festival will resume next year in May, but Beejhy promises that from time to time films will be shown at Tsion throughout the year.

Along with movies, the first Thursday of the month is poetry night. On Friday and Saturday nights live music is offered. And on any night of the week customer might also become engaged in a panel discussion on some aspect of Ethiopia.

Open 7 days a week, Tsion Café serves breakfast, lunch and dinner. Monday through Wednesday, the restaurant is opened from 8 AM to 9 PM; Thursdays and Fridays from 8 AM to 11 PM; Saturdays 10 AM to 12 PM; and Sundays from 10 AM to 8 PM.

Tsion Café and Bakery is a festival in itself of great food and cultural enlightenment in Harlem’s Sugar Hill district and well worth checking out. (Tsion Café & Bakery: 763 St. Nicholas Avenue at 149th Street)