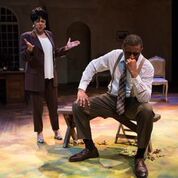 “Autumn” tells the story of Franklyn Longley, a veteran big-city Mayor who is in line to become the first black Governor of his state. He suddenly finds his place in history threatened when his party decides to throw its nomination behind a dynamic young politician who is also black and just so happens to be the Mayor’s Protege. Written by Richard Wesley. Directed by Seret Scott. Cast: Jerome Preston Bates, Count Stoval, Michael Chenevert, Terria Joseph, Stephanie Berry and Tony Sallemi, Kim Weston-Moran.