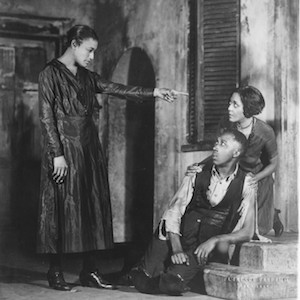 Through memorabilia, photos, film and original artwork, learn about the theaters that bloomed and survived, the people who were driven to keep them vital, and the explosion of Black Theater productions that marked the 1960s and continue to this day. The message of the exhibition is strong: Black Theater plays a crucial and continuously vital role for Harlem, New York City, and the world.

As the exhibition moves to The New York Public Library for the Performing Arts at Lincoln Center,

it additionally explores the important collaboration in the 1980s between New Heritage Theatre Group and Lincoln Center Theater to bring South African playwrights and voices to New York. These productions exposed audiences to the realities of life under apartheid through new, brilliant stage experiences—among them Woza Albert! and Sarafina! At the time, it was considered audacious for Voza Rivers, Executive Producer of New Heritage Theatre Group in Harlem,  Bernard Gersten, then Executive Producer, and Greg Mosher, Artistic Director of Lincoln Center Theater to bring South African playwrights, including Mbongeni Ngema – who created Woza Albert!, Sarafina!, Asinamali, Township Fever – and the Woza Afrika Festival to New York. Commenting on the importance of this project, Mosher said, “One might imagine that the plays of Woza Afrika Festival and Sarafina! sprang from rage…but their work emerged from courageous hope.” New York theater-goers were mesmerized and flocked in droves to the presentations.

Planned are many special performances, conversations and symposia at the library and at partner sites including the Apollo Theater, the Schomburg Center for Research in Black Culture, City College Center for the Arts-Aaron Davis Hall. Community Works NYC continues to fulfill a promise it made 25 years ago to advance the arts as a bridge among New York’s diverse neighborhoods and cultures.