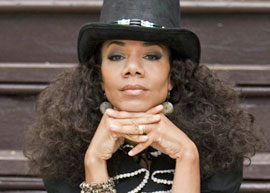 Charismatic songstress Martha Redbone is one of the leading contemporary Native/African-American musicians. A multi award-winning musician, she has established a solid history of performing and mentoring internationally. Martha has built a passionate fan base across the country and carries the torch of her forebears in Contemporary Native American Music in raising awareness of her culture worldwide through the release of her albums Skintalk and Home of the Brave in Europe and Japan. Performing Songwriter described Redbone as “part Aretha Franklin, part Neville Brothers, part tribal powwow.” Her latest album, The Garden of Love – Songs of William Blake, is a twist on the Appalachian music of her childhood in Black Mountain, Kentucky. Produced by John McEuen of the Nitty Gritty Dirt Band, the album is a brilliant fusion of Blake’s immortal words, a cornucopia of roots music (Americana, blues, gospel) and Redbone’s magnificent voice.

Whether they’re playing for thousands of people at Carnegie Hall or a handful of curious passersby on the subway platform at Grand Central Station, The Ebony Hillbillies bring history alive with the still vibrant sound of Americana. As one of the last black string bands in the U.S. – and the only one currently based in NYC – the Hillbillies keep an important legacy alive with a rootsy, homegrown style that many forget was a key element in the genesis of all the music we cherish as uniquely American – jazz, blues, bluegrass, rockabilly, rock and roll and country. Bringing a fresh urgency to the genre for a 21st century world in need of some deep musical education, the ensemble led by Henrique Prince (fiddle, vocals) and Norris Bennett (banjo, mountain dulcimer, guitar, vocals) and featuring Gloria Thomas Gassaway on vocals and bones, William “Salty Bill” Salter on acoustic bass with A.R. or Newman Taylor Baker on washboard and percussion, creates an untamed and joyful vibe that echoes across the generations and transcends all racial and cultural boundaries.