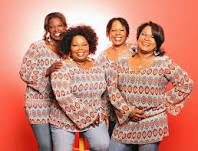 Singing in the traditional African-American a cappella gospel style that they have been known for since the group’s inception almost 100 years ago, The Fairfield Four continue to perform original, tightly harmonized pieces and traditional favorites. Teaming up with The McCrary Sisters—frequent Bob Dylan collaborators and the daughters of Fairfield’s late leader—the two virtuosic groups show how the spirit-stirring sounds of gospel sparked the rock and R&B revolution.