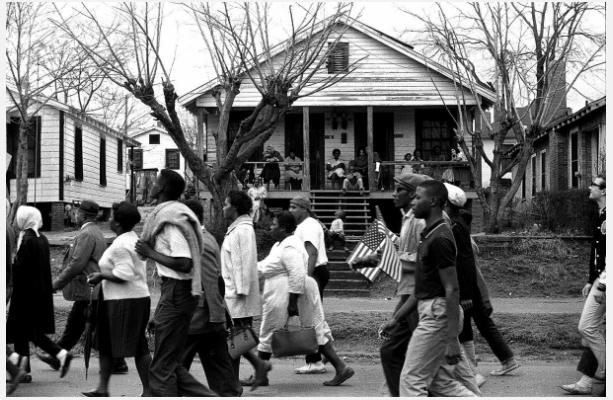 
This exhibit features the stunning and historic photographs of Stephen Somerstein, documenting the Selma to Montgomery Civil Rights March in March 1965. Somerstein was a student in City College of New York’s night school and Picture Editor of his student newspaper when he traveled to Alabama to document the March.

He joined the marchers and gained unfettered access to everyone from Martin Luther King Jr. to Rosa Parks, James Baldwin, and Bayard Rustin. “I had five cameras slung around my neck,” he recalled. Over the five-day, 54-mile march, Somerstein took about four hundred photographs including poignant images of hopeful blacks lining the rural roads as they cheered on the marchers walking past their front porches and whites crowded on city sidewalks, some looking on silently-others jeering as the activists walked to the Alabama capital. Somerstein sold a few photographs to The New York Times Magazine, Public Television and photography collectors, but none were exhibited until 2010, when he participated in a civil rights exhibition at the San Francisco Art Exchange.

Rather than choosing photography as a career, Somerstein became a physicist and worked at the Harvard-Smithsonian Astrophysical Observatory and at Lockheed Martin Company. It was only after his retirement in 2008 that he returned to his photography remarking that he wanted “to have exhibitions of my work and that I realized that I had numerous iconic as well as historic photographs.” Among those photographs were his moving photographs of that memorable march to Montgomery in 1965.