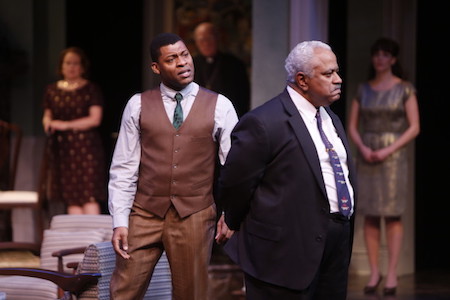 “Guess Who’s Coming to Dinner,” the classic ‘1960s film starring Sidney Poitier has been recently adapted for the stage with its powerful message of tolerance, acceptance and love. The Repertory Theatre of St. Louis is presenting the fourth ever production of Todd Kreidler’s adaptation. “Guess Who…” the film had several sweetly humorous moments, but the play taps a depth of comedy that reaches hilarity at times as the issue of an interracial union in 1967 is reexamined from a 2015 perspective. When Matthew Drayton (father of the young white girl who is affianced to Dr. John Wade Prentice, a world renown black doctor) asks if they are considering children, John replies, “She says ‘All of our children will be President of the United States…’” The predominantly white, middle-aged, Missouri audiences roar because a bi-racial Barack Obama is currently President of The United States of America for a second term, an unimaginable possibility in 1967 when civil rights protests and race riots ravaged the nation. But other “Guess Who…” dialogue is eerily sobering, e.g. Mr. Drayton arguing, “There are towns – cities in this country where you cannot, by law, drink from the same goddamn water fountain. Hell, it’s in the Supreme Court right now – there are states where what you propose to do is illegal!” There are states right now that prohibit a legal status for other “taboo” unions like same-sex marriages and mentally challenged couples. Today, there are also social and cultural controversies that result from interreligious couples, imagine a Judeo-Muslim marriage, or May-December couples like a cougar tying the knot with her boy toy. In case that subtle message is missed, The Rep also features a lobby exhibit that celebrates local couples that have maintained a deep love and commitment to their partner in spite of public dissension. Their exhibit includes interracial, lesbian and gay married couples. Visit their website at www.repstl.org for details.

Perri Gaffney 6 years ago
Do NOT follow this link or you will be banned from the site!