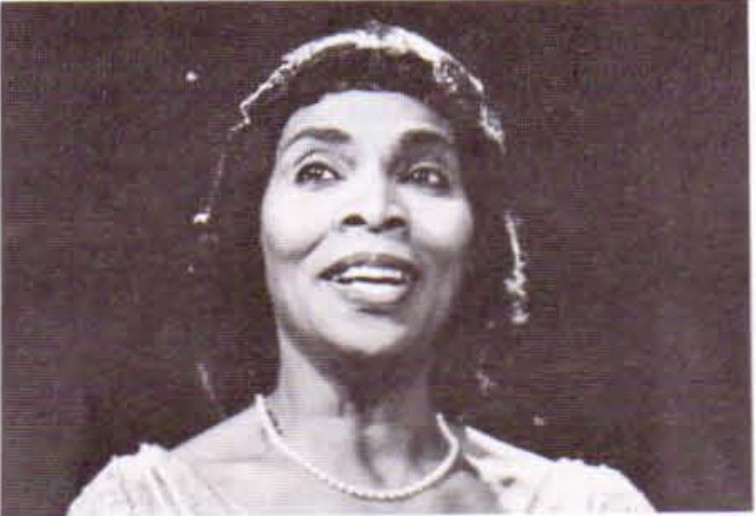 Marian Anderson, today more than ever, represents the rewards of being determined, dedicated and prepared. Miss Anderson’s exemplary talent and loyalty to her dreams, at a time when Blacks dared not dream, forged a path for many to follow.

From the South side of Philadelphia to courts of royalty, Marian Anderson always seemed to chart her course firmly with sound advice from her mother. Her levelheaded, modest attitude never ran wild into starstruck affectations.

Her life as a youngster was filled with highs and lows. Losing her father at age 10 helped seal a tight bond with her mother. She was never hungry, lonely for love or far from a church — The Union Baptist Church. Singing in the choir occupied most of her time. The choir proved to be a source of support for Marian when both the membership and Marian herself realized that vocally she needed more than “choir” training. The church collected money for her first teacher, Mary Saunders Patterson. Marian learned the difference between natural singing and controlled singing.

Unlike many naturally talented people, Marian always sought formal training: Even though her audiences always marveled at the range of her vocal ability and the beauty of her rich full-bodied voice, she knew instinctively, it seems, that training, practice and discipline would help her realize her success as a fine contralto singer.

Lady Luck smiled on her early career. There were always people to raise money for her lessons. To have inspired Blacks to contribute for lessons during the lean years of the thirties was a stupendous achievement in itself. Mr. Baghetti was one such instructor, hired with collected funds to train Marian. Baghetti groomed Marian into a professional performer, a quality which she has had to rely on many times when spirits or health is low.

Touring the South by train, bus and car taught Marian lessons about life and people that had only grazed her slightly when she was in Philadelphia. Segregation and Jim Crow laws caused unwarranted personal anguish for Marian, but at no time has racial prejudice embittered her. Adversity spurred determination instead of hatred, and yet another rather than a closed mind.

In 1923 and 1925 a series of contests were held and Marian entered and won the latter one in New York’s Lewisohn Stadium. Winning the contest and getting a positive critique in The New York Times accelerated her career almost immediately. With tours plentiful and income reasonably higher, Marian set her sights on yet another plateau.

Europe presented Marian with the opportunity to improve her voice, image and acceptability in the classical music circles in the United States. Europe posed new problems, but Marian learned — she made no money — but she learned. Marian returned briefly in 1930 when her money ran out, and was lucky to get a partial Rosenwald Friend Fellowship to return to Europe.

This European trip proved to be memorable. In Vienna, the home of Schubert, Marian Anderson fulfilled a personal dream by triumphantly singing her favorite writer’s music in his own city. She sang before Maestro Arturo Toscanini, who is quoted as saying, “Yours is a voice such as one hears once in a hundred years.”

Marian could have remained in Europe. Both her acceptance and her fee were higher there than at home, but she chose to return to America. The people who invested money, love and faith in her when she needed help were here.

Probably the most consequential event during the European tour was meeting Sol Hurok at one of her Paris performances. Hurok was so impressed that he asked to manage her career. Hurok was for decades America’s impresario without peer. Everywhere doors opened for her now, and Miss Anderson toured the greatest concert halls in the US.

On April 9, 1939, Easter Sunday morning, a multitude of people gathered in Washington, DC at the Lincoln Memorial to hear Miss Anderson perform. The crowd was especially large and charged with emotion because the D. A. R. [Daughters of the American Revolution had refused to allow Miss Anderson to sing in Constitution Hall. Their policy prohibited Blacks from singing in the concert hall.

Eleanor Roosevelt, when informed of the insult, publicly through the press resigned her membership, as did many other notables.

Singing for Miss Anderson was always professionally correct no matter who her audience was. The troops of World War II and the patrons of Carnegie Hall in New York City received performances of equal quality.

On January 7, 1955, Miss Anderson achieved a career high when the curtain at the Metropolitan Opera rose to The Masked Ball, with Marian playing Ulrica.

Time and age have not stopped Miss Anderson’s interest and support of young talent. Several months ago she sang in New York City to kick off a collaborative effort of Columbia University and The Dance Theater of Harlem.