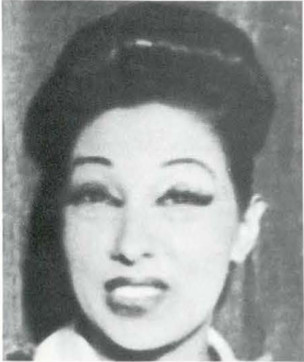 To tell the story of Josephine Baker within the space limits of one magazine page is but to skim the surface of one of the most colorful careers in the history of show business. Described by author Stanley Green as “Nefertiti and the Queen of Sheba and Cleopatra all poured into one Balenciaga gown,” Ms. Baker possessed enormous talent as a singer and dancer, which she combined with a worldly sophistication that belied her humble beginnings. Born the daughter of an East St. Louis washerwoman, she rose meteorically from abject poverty to the very top of her profession, and became the first Black American to achieve international super stardom.

Like so many Black entertainers of her day, Ms. Baker entered the world of show business by running away from home to join a traveling troupe. In 1922, at the age of 15, she landed her first important job, a thirty-dollar-a-week part in the chorus of a touring company of Shuffle Along, the all-Black Sissle and Blake Broadway hit. In the show, which toured the New England states, young Josephine’s energetic personality, offbeat humor and stunning looks stole the show and garnered her a more prominent role doing specialty numbers in The Chocolate Dandies, the successor to Shuffle Along. The rapid rise had begun.

In 1925, when Ethel Waters — then starring in The Plantation Revue — turned down an offer to go to Paris as the headliner of that city’s first all-Black stage show, Ms. Baker seized the opportunity. The show, La Revue Negre was a sensational success because it was unlike anything Parisians had ever seen before, a dazzling, outrageous and stunningly exotic blend of beauty and le jazz hot. Billed as The Dark Star, the lanky eighteen-year-old Ms. Baker, wearing little more than a pink flamingo feather between her legs, whipped her audiences into a frenzy as she made her entrance dancing a wild Charleston atop a huge drum. A few months later she topped that performance by dancing on a slanted mirror, at the famous Folies-Bergere, dressed in what was to become her trademark: a revealing string of artificial bananas.

Within two years, “La Baker” had evoked the envy of millions of women throughout Europe; her 40,000 fan letters are said to have included about 2,000 marriage proposals, she was the subject of suicide notes, and — as she changed the course of Parisian entertainment—stories of her flamboyant offstage antics provided fodder for the world’s press. The personification of early chic, she strode down the Champs Elysees with either two leopards or two swans on a leash, she grandly took her diamond-collared pet cheetah to the Paris Opera [only once, for it became nervous and mauled a musician in the pit], and she had the top designers of the day eager to drape her in their latest originals — even royalty beheld the glamorous washer woman’s daughter with awe.

In the early Thirties, while a racial barrier continued to block her acceptance in America, Ms. Baker — on a two-year world tour of twenty-five cities — showed clamoring crowds from Prague and Budapest to Berlin and Barcelona that Black is beautiful. The Ziegfeld Follies brought her back home in 1936, but the reception was lukewarm, and she soon returned to France. During World War II Ms. Baker demonstrated her gratitude to the French people by working with the French underground — her espionage activities, said to have been most effective, won her the coveted Croix de Guerre, but even that failed to move the American public as she returned to her homeland in 1947, Not until 1951, when she was 45, did Josephine Baker finally make a successful visit to the United States, but even then she ran up against racism [after the Stork Club refused her entrance, columnist Walter Winchell called her a Communist, Fascist and anti-Semite], and if she returned to France more financially secure, she also returned with renewed determination to speak up for the rights of Black people.

While appearing at the Paris Olympia in 1956, Ms. Baker announced her retirement; she had purchased a 600-acre estate with a 12th-century château outside Paris, and she planned to spend the next few years there raising her twelve adopted children. But financial problems forced Ms. Baker’s return to the stage in 1959, to fight a ten-year losing battle against rising costs and diminishing booking fees — in 1969 Josephine Baker and her “rainbow tribe,’’ as she called her multi-ethnic, multi-national children, were forcibly evicted from their home.

The energetic entertainer continued to perform, In 1973 enthusiastic audiences greeted her in New York and Los Angeles, on her first state side appearances in nine years, and in 1975 Parisians once more throng to see her as she held an on-stage celebration of the fiftieth anniversary of her Paris debut. The following day, as Paris newspapers lauded her achievements, Josephine Baker, a legend in her own time, quietly passed away. There will never be another “La Baker,’’ but her artistry, benevolence and deep social concern will continue to touch the hearts and minds of generations to come.