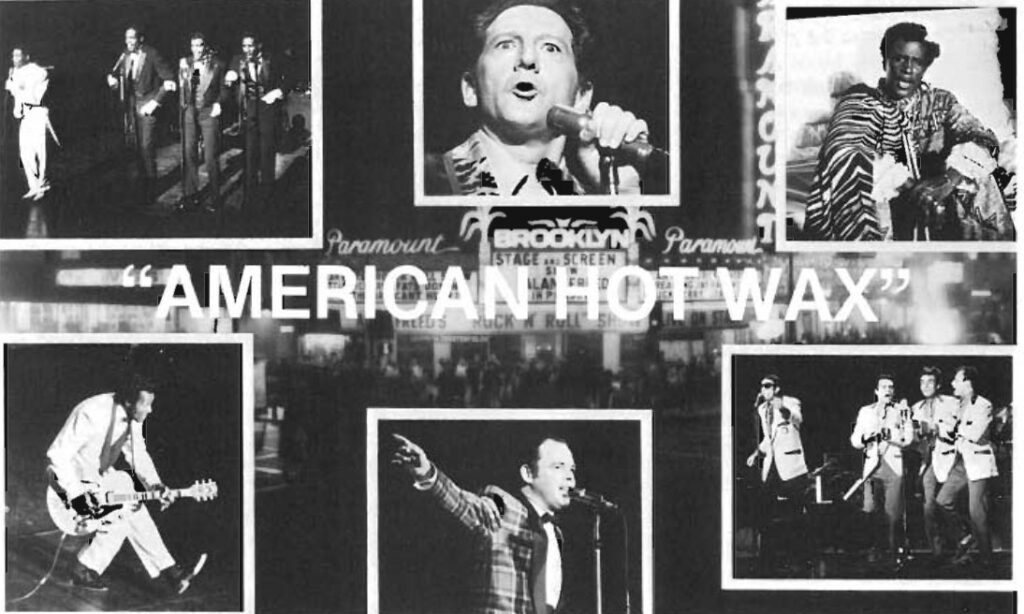 Paramount’s salute to the oldies, American Hot Wax, represents Hollywood’s fantasy machine at its best. The film’s total cinematic effect is made enjoyable — in spite of the picture’s clumsy editing — because we get a chance to hear prime oldies.

The one-week episodes in the life of Alan Freed are excruciatingly boring. Director Floyd Mutrux transports us back to 1959. Rock and Roll, Freed’s euphemism for rhythm & blues, has reintegrated Black music into the American cultural mainstream. Freed, the prototypical Top Forty Dee Jay, is staging his first annual show at the Brooklyn Paramount and the local establishment, in the form of a narrow-minded District Attorney who thinks Sixty Minute Man is a paean to debauchery, is out to stop him. The airway is alive with the sound of Doo Wop!

For those of you who were there, the plot of American Hot Wax might seem a bit incredulous; the oldies are played in bits and pieces without any reference to actual release dates or artists and, if you look closely enough, in one scene you actually can spot a palm tree-growing in Brooklyn.

“I don’t think people care that much about who Alan Freed really was,” admits producer Art Linson [Car Wash]. “I just wanted to use Alan Freed as a fictional pivotal point; we could have almost called him anything we wanted to but it’s really a movie about the early days of rock and roll and the people who were most affected by it — the kids, the groups, the disc jockeys. The people who were there. The people who knew what was happening.”

Tim McIntire’s pedestrian performance as Freed ranks with the disc jockey’s own walk through acting [remember Don’t Knock the Rock and Mister Rock and Roll? Maybe it’s better you don’t]; but what else can a pivotal point do? “This is my last film for a while, I want to spend time with my own group, Funzone,” says the son of actors John McIntire and Jeanette Nolan, understandably at a Beverly Hills Press conference.

Laraine Newman as Teenage Louise fluctuates between adequate and embarrassing. Fortunately, her better moments are her scenes with the Chesterfields.

Carl Earl Weaver, Al Chalk, Sam Harkness and Arnold McCuller are the four young actor/singers assembled by Kenny Vance for the film. [Vance, a former member of Jay and the Americans appears as Prof. Planotone,” singing the DelVikings great hit Come Go With Me]. When they open Wax’s 10-minute, show-stopping revue with Why Do Fools Fall in Love you’ll think they’re the reincarnated Frankie Lymon, Little Anthony, the Teenagers and Imperials combined.

Jay Lindo and Fran Drescher, as Freed’s sexually bickering gofers provide the film’s all too brief acting highlights.
The real star of American Hot Wax is, of course, the music. Rock and Roll was only the natural progress of an art. In this century alone, Jazz, Blues, BeBop and Boogie Woogie had people snapping their fingers [and still has] long before Freed began as radio personality, Moondog, baying at the moon in Cleveland in 1951. What he did do for the music was homogenize it for commercial, white AM radio in an era when Blacks were only heard on race stations or records.

“He was a Black musician’s Jesus Christ!” Screaming Jay Hawkins, who appears in the film along with Jerry Lee Lewis and Chuck Berry, still says today.

One can understand Hawkins’ deification of Freed. Until recently the Chitlin’ Circuit offered Black performers their only commercial outlet, while white artists appeared with hits that, in many cases, were rip-offs [the trade would rather call it “covering”] of original R&B hits. Pat Boone’s rendition of Fats Domino’s Ain’t It A Shame was such a blatant, bleached imitation of the original, the practice actually became unprofitable because white audiences demanded the original product. Enter Alan freed.

At his peak Freed made $75,000 [excluding payola] a year playing Black music for that audience. He died in the early 1960s but by that time R&B had evolved into Motown, Soul, Philly and the Memphis sounds of the 1960s. Today’s sound has matured into the technical realm of Disco while Rock has moved to the point where Punk is considered avant-garde and a safe product at the same time!

The fact that Black music exists, let alone flourishes, is a miracle in itself. Watching American Hot Wax, one can perhaps grasp the power behind the music of a decade.