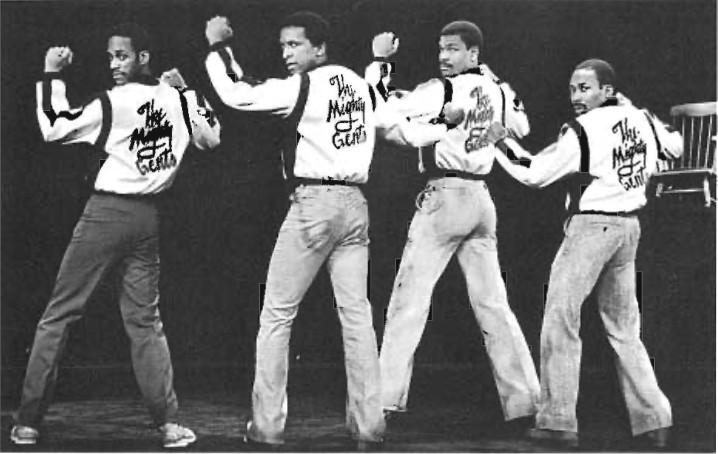 To miss a Richard Wesley play is to miss something important, something that helps to better understand the world in which we live.

Playwright Richard Wesley is a 32-year-old, Newark-born, Howard University-educated father of two, who now lives in East Orange, New Jersey. Every Wesley play I have seen —  The Black Terror,  The Past is Past,  Going Through Changes, Strike Heaven on the Face: the definitive work on the effects of the Vietnam War, The Sirens and the latest Broadway Production, The Mighty Gents do what a play should do: inform, motivate, illuminate, inspire, provoke thought and entertain. Richard makes it his business to create characters, not caricatures, to make the audience think, not just respond and to offer penetrating insight, not just rhetoric. The Mighty Gents is a good example.

Richard describes his latest drama as an “allegorical play, which on the surface is about a group of 35-year-old men who in their younger days, the early 1960s, were members of a street gang, The Mighty Gents. Since then, not one of them has gotten his life together. They are unemployed and unemployable. One, a Vietnam Vet, returned home and again joined the others on the street corner. They live in a completely closed society. A woman character, Rita, is the only one trying to find a way out of the predicament. The men are trapped in a time warp, living in the past, spending their days and nights talking about past glories as young Mighty Gents. They refuse to face the realities of the present. And when they finally do attempt to deal with the present, they use the same methods they did in the past. The attempts fail.

“I call the play allegorical because it parallels what I saw happen to too many of us in the 1960s. Increasingly frustrated with our efforts to deal with the present realities, we became too enamored with the past, with glorifying past heroes and events that we never came up with political solutions for the present and the future. Thus we continue to make the same mistakes over and over again.” Richard explains.

Speaking further of the sixties, Richard observed “one of the biggest mistakes we made was to assume that the Black experience and the culture of poverty were one in the same. They were not, as I was to find out when I read a magazine article on a poor white family who had moved from Appalachia to Chicago. When they got there, the father couldn’t find steady work. Eventually he found none at all. The mother began to work while he stayed home, becoming more and more frustrated.

He lost his position in the family. Family discipline broke down. The daughter became pregnant. The sons started hanging out in the streets, eventually going into crime. Except for the color of their skin, the description of what happened to them was what we had thought had been an exclusive phenomena of Black urban ghettos. “An old James Cagney movie about growing up in a northern Irish ghetto and other things I saw and read made me realize that what we playwrights had been writing about had little to do with Blackness per se, but with the culture of poverty. I became concerned with understanding where the Black experience ended and the culture of poverty began. And I began centering my plays on people instead of concepts. When I wrote, The Sirens, instead of concentrating on the pimp in all his gaudiness and slickness, I dealt with the women as individuals.”

Richard’s new approach was successful. When The Sirens was first produced, I had sworn not to attend another Black play dealing with pimps and whores, but I’m glad I went. Richard presented a penetrating insight into the women, how they had become what they were and the prices they had paid. Buttressed by brilliant performances by Loretta Green and Veronica Redd, the play was definitely informative, illuminating and thought-provoking.

In addition to writing for the stage, Richard also has written several film scripts, including Uptown Saturday Night and Let’s Do It Again and one television pilot, a situation comedy called Cool Breeze which has been bought by CBS and will be aired in June. When asked if there is a difference between writing film scripts and writing plays, Richard responded “In writing for films, unless you are producing and directing it yourself, you are basically interpreting the vision of the producer and director. Whereas in a play, you put more of yourself in it. When I do a film script for someone I make myself kind of disappear and give the producer and director what they want. If I have strong objections to what they want, I don’t take the job.

At this point, Richard decided to comment on something that was obviously bothering him — NBC’s six-hour movie on Dr. Martin Luther King, Jr. Though he had a low opinion of the whole project, it was the depiction of one particular character that really bugged him. “What they did to Brother Malcolm X,” Richard said angrily, ”was totally unnecessary and almost criminal. I sat before the TV in stony silence, wondering why even now, years after his assassination, they still have the need to distort what he was all about. After watching the King show and seeing what happened to Phillip Hayes Dean and his Robeson piece, I would hesitate to do a play or film or TV script on an historical Black figure, especially one whose life is still very fresh in people’s minds.”

Richard concluded by noting the major influences in his playwriting career — Owen Dodson and Ted Shine, his teachers at Howard University, Bob McBeth and Ed Bullins, with whom he worked at the defunct New Lafayette Theatre, The Playhouse 90 teleplays he watched on TV in the late 1950s and the Black Liberation Movement in the 1960s and early 1970s.

His favorite plays include A Recent Killing and The Toilet by Imamu Baraka, The Warning — A Theme for Linda, by Ron Milner, The Duplex and Daddy by Ed Bullins, African Interlude by Marti Evans Charles and Anything by Adrienne Kennedy. Of his own work, his favorite is The Past is Past, a searching, moving and brilliantly drawn look into the first meeting between a son and his errant father. Of it Richard said: “Everything I wanted to happen in that play happened just the way I wanted it to. I feel I got it all together.”