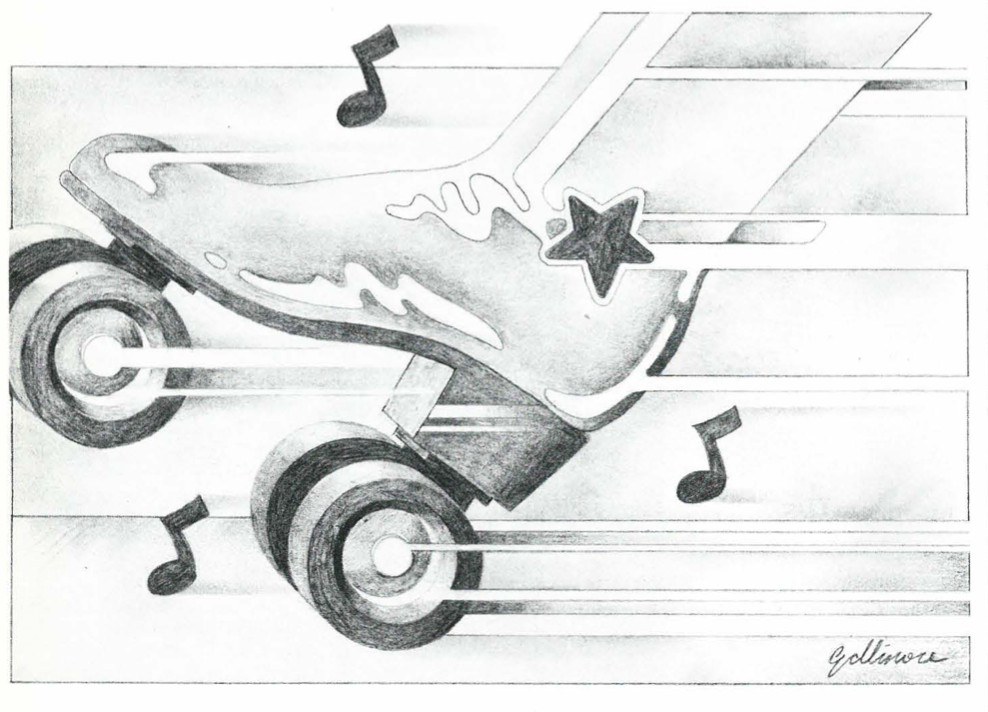 Remember those “clip-on” skates you used to fasten to your shoes with a key? You would put them on, grow a few inches taller and another self would fly free. Remember how you’d zip up and down the block, sometimes in  a crouching position like the Roller Derby? Or sometimes on one skate? You thought you were hot, didn’t you? As you grew older, moving on, you viewed rollerskating as little league. Those old skates of yours were either passed on to a brother or sister or thrown away.

I’ll bet you six ball bearings that you haven’t been on a pair of skates since then, right? Well, hold tight! That old kids’ stuff is back — bigger and better than ever. The roller skating momentum, building for 20 years, now has taken on a new dimension in sight and sound. The disco on wheels is an adult social boom!

The top of the yellow marquee reads, 631-Skating Rink. Utica Skating Rink, where 300 roller skaters, rail clingers and socializers have gotten together to celebrate a birthday. It’s a Roller Skating Disco Birthday Party! [The rink is available weeknights for private parties at $2 a head for the first 100 persons and $1.50 per for all over that amount. It accommodates 1,000 persons and the skating floor holds 700 comfortably.]

With small bright eyes that sparkle through horn-rimmed glasses, our birthday host, Vinzerrelli, beckons us in. The disco sounds are powerful. It’s impossible to have a conversation — but that’s all right, you came to roller skate, not converse.

We find a small space on the railing and move in closer. It’s amazing. A disco Army of speeding bodies zooming around the rink. The army whizzes by us at what seems to be 100 miles per hour. [It’s really 20-25 mph.] As the skaters zip around, they create a cooling system — a sort of human fan for the rail clingers. The skaters in the center of the rink are doing all kinds of fancy disco steps — Hustlin’, Freakin’ and just doing whatever they feel to the groove of the music. “Ladies only, everyone else off the floor.” The DJ, sitting in his ivory tower, pipes again: “Ladies only.” The DJ is the “Big Brother” of roller skating rinks. He’s the one who calls the shots. Only he knows when to flip you into a physical fit and just when to cool you out with mellow sounds.

Disco skating is a fun sport. It gets you moving to the rhythm of a solid beat, not anything at all like ice skating. Disco roller skating lets you “get down” around the rink with character, kick and comedy. It’s the kind of sport that’s great for your body and your mind.

The first time you attempt to roller skate will be rough. You’ll slip, slide and undoubtedly fall. But don’t be discouraged; there will always be someone to help you to your feet again. After a while, you’ll get to the point where wheels will feel like shoes. That lost aplomb will zoom right back as you learn to conquer the floor. Once you do, you can do just about anything — going forward. Then all of a sudden it will happen — you’ll be skating backwards. It will come as natural as learning to walk. Then you’ll get a partner.

“Couples, Couples only,” shouts the DJ, the lights dim. The revolving mirrored globe in the ceiling glitters. Hand in hand, couples float to the floor, skating side by side, an arm draped around each other’s shoulder, moving backwards to the soft mellow sounds and dimmed lights. Skating backward is the piece de resistance, the ultimate. You just glide smoothly with your partner and ride high on the disco sound.

As the house lights come on, the chanting begins: Jig-a-Boo! Jig-a-Boo! Suddenly, four young men dressed in red zoom onto the floor. They take positions and the music begins. Do the bus stop…, they step and stop, turn and spin. The chanting continues. Then, two small Jammers skate to the floor and do fancy steps, crossing over, crouching together arm in arm. Next comes Vinzerrelli, who dazzles us in his white satin two-piece vested suit and sparkling gold satin shirt; his skates are green metallic with silver glitter at the toes. He soars around with accelerating speed. The chanting reaches a frenzied pitch. Vinnie begins his unique roller skating dance routine — splits, flips with and without a walking cane, forward, backwards, spins, somersaults, and handsprings — acrobatic feats you’d have to see to believe. Vinzerrelli has been roller skating for a mere ten months and already has appeared in several New York magazines for his fantastic roller skating showmanship.

Anyway, if you enjoyed roller skating as a child, you’ll get a bigger kick out of it as an adult. If you haven’t been on a pair of skates for a long time, don’t worry about losing face; the first few days are rough. But if you’re a weight watcher, you’ll lose pounds’ too. With each rotation around the rink, you’re burning up an average of 400 calories in every spinning hour.

“The skaters in the center of the rink are doing all kinds of fancy disco steps — Hustlin’, Freakin’…”

It has been said that roller skating is like jogging without the huffin’ and puffin’. There is total body involvement; your legs, your thighs, your hips and your waist. You’ll be using them all. Roller skating, without a doubt, rejuvenates the body and elevates the spirit.

The skaters gradually begin to disappear from the rink. The Roller Skating Disco Birthday Party has come to an end. But there’s more. Every Monday night at the Utica Skating Rink, Vinzerrelli gives skating instructions for the novice. Intermediate and advanced skaters can do their own thing. If you learn to roller skate well, who knows, maybe you too can become a Jig-a-boo Jammer.

Although most roller skaters wear jeans and shirts, you can wear whatever is comfortable for you. Most important are cotton socks, because they absorb the perspiration more readily than synthetics. If you wear glasses and are really serious about roller skating, an investment in a pair of contact lenses is advisable. If you’d prefer to own your wheels rather than rent them, the Rolls-Royce of roller skates is the Douglass-Snyder Precisions. The precision wheels with encased ball-bearings roll more evenly, and they feel better than shoes! These skates can cost up to $350. On the other hand, cheaper ones cost as little as $40. A good pair of skates consists of a leather boot with a firm counter [metal support] in the heel. It might not be a bad idea to try the rentals for a while until you decide what’s right for you.