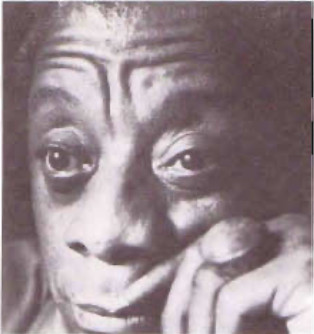 At the ripe young age of fifty-five, author James Baldwin has produced a mammoth testimonial to the many segments of his life, the life of America and the lives of black people.

In Just Above My Head, the author’s latest novel, Baldwin has returned to the subjects he knows best—black life in Harlem, the Church and how it affects its members. But the book does not confine itself to Harlem alone — it wanders to Atlanta, Washington, Birmingham, Africa, Korea and France.

Throughout this expansive [597 pages] work, Baldwin’s familiar theme of love — its absence and its misuse — surfaces again and again. Love enters and disrupts the lives of all the book’s central characters. These include Hall Montana, the chief narrative voice, and Hall’s brother Arthur, an acclaimed singer, more popularly known as The Soul Emperor. Arthur, along with Red, Peanut and Crunch, is a member of the youthful Trumpets of Zion gospel quartet. Narration is also provided by Sister Julia, the child preacher, who, after being raped by her father, leaves the pulpit to try her hand at modeling and prostitution. She journeys to Africa, like a pilgrim in search of a home, only to return disillusioned to the States to begin a new life as a Yonkers housewife.

By involving us in the heartaches, trials and triumphs of these characters, Baldwin sends the reader on an emotional roller coaster that never seems to come to a halt. Baldwin’s writing attains dizzying heights when he describes the love scenes between Arthur and Crunch and plunges to the depths of raw bestiality when he depicts the violation of Sister Julia. At times, the language in the novel seems to flow on and on like the River Jordan. But just as the reader begins to be lulled by the fluidity of the prose, the sordid reality of life rears its head, warning us that we are about to drown.

In all of his previous books, Baldwin has relied heavily on black religion as one of his central themes. And Just Above My Head is no exception. Here, the author cleverly undermines the myth that God is some blue-eyed, white haired being who sits in heaven waiting for his children to come home. To use a familiar biblical expression, Baldwin has once again and bravely so put his bread on the water. He recounts in his writing the intimate details of his life with tenderness and eloquence. Sister Julia’s experience is akin to Baldwin’s own childhood as a pulpit sensation. Moreover, the localities of the novel trace Baldwin’s stomping grounds as an expatriate and political activist.

In a political and social sense, Baldwin’s readers will not find much of the vehemence that characterized such earlier works as The Fire Next Time and No Name in the Street. Instead, they may detect him working with a new form that perhaps only he can define. Although Baldwin’s hostility and rage towards white America are still in evidence, there emerges from this man who has been in the forefront of much of this century’s change — a cry for love, a cry for people, both black and white, to try to communicate with each other. Only then, Baldwin believes, will America have a chance to survive.

However, Just Above My Head, more than any other Baldwin work, exists on a personal rather than a political level. Baldwin bestows upon all the characters in the book a protective, fatherly concern rooted in compassion and understanding. But he recognizes too that parents cannot protect their children forever; children must, at some point in their lives, go out and face the world. Thus, the author aptly moves his various child characters — Arthur, Crunch, Peanut, Sister Julia and Red — from the dawn of childhood to the eve of adulthood.

What Baldwin does with these characters, how he makes them act and react, evokes a nervous kind of pain and anguish. He portrays his older characters as visionaries who tell their children what their eyes have seen. The pain that comes through their voices is the same pain that Baldwin’s sensitive eyes have seen and a pain that he is still reckoning with.

Just Above My Head abounds with the plaintive cries of black despair. While the book may not be considered Baldwin’s masterpiece, it certainly testifies to the author’s poetic eloquence and his consummate ability to make the reader feel.

Just Above My Head signals both an end and a beginning for James Baldwin, The book is the work of a teacher who has spent the last 30 years observing and living the black experience. In Just Above My Head, James Baldwin is repeating cries that have gone out for many years — cries for love and salvation — cries that still, even today, hover just above our heads.