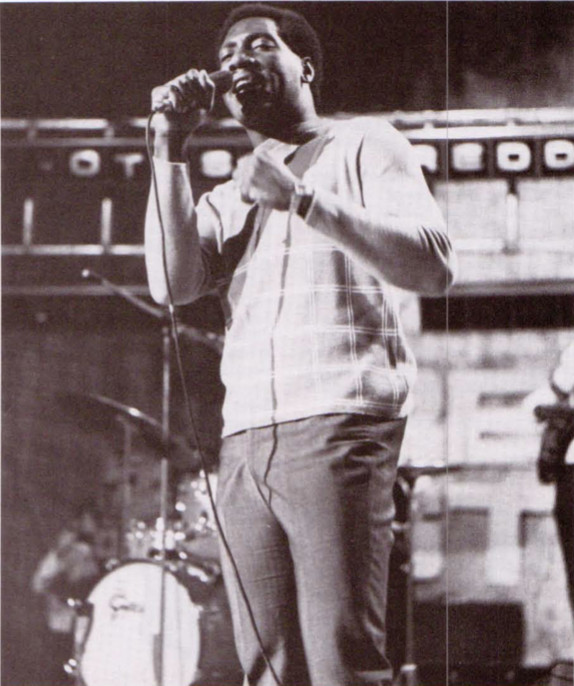 Otis Redding was only 26 years old when his twin-engine Beechcraft plane crashed into Lake Pomona, Wisconsin on December 10, 1967, sending him to an untimely death.

One could never tell by listening to his memorable recordings such as Try A Little Tenderness or Pain In My Heart, that he was that young. But there was a quality of universal weariness in his voice that spoke of painful life experiences. If ever a man had sung as if the world were pressing upon his shoulders, it was Otis.

He captured the languid beauty of the rural South with wonderful ease. His version of early rhythm and blues star Solomon Burke’s Down In The Valley, created a landscape of green grass, warm sun and tranquil surroundings, while remaining true to the song’s story line. His voice, in fact, had many of the same qualities as that of Ray Charles, who was born not far from Otis’s native soil and who still sings with that hauntingly beautiful worldly timbre.

Otis Redding was born in Dawson, Georgia into a family of eight. His father, a minister, brought the family to Macon when Otis was still a child. Macon was the hometown of Little Richard, a singer whose revolutionary rock style would have a profound influence on young Redding. Otis’s first singing experience was in his father’s church, where he also learned to play a wide range of musical instruments, including the guitar, bass, organ, piano and drums.

Otis started working at odd jobs when he was 15 years old, and before long he joined a band called Johnny Jenkins and the Pinetoppers. He did some singing for them, but his main role as a Pinetopper was to be a chauffeur.

Nonetheless, a determined Otis Redding cut his first record in 1960 on the Bethlehem label. The A-side was an uptempo rocker entitled, Shout Bamalama, where his vocals, according to all reports, sounded just like Little Richard’s. The record was greeted by a less than enthusiastic public.

A year later, Otis traveled to California, where, for six months, he worked as a cabbie and performed other odd jobs. He managed to cut a couple of singles on the Fine Arts label and another on the Alshire label (yet another Little Richard imitation). Both were sales fiascos and it was clear that Otis’s admiration for Little Richard was slowing up his own creative development.

As 1962 rolled around, Otis was still driving the Pinetoppers to gigs at colleges and dance halls throughout the South. Although the fellows were making a steady living as a dance band, the Pinetoppers were looking to join a solid recording company and become national attractions.

So, in 1962, the group, along with Otis, their rather shy driver, traveled to Memphis to audition for Jim Stewart, the president of Stax Records. The company was only two years old at the time and hadn’t established itself yet as a major recording center. Stewart, however, was confident about his plan to mold the talents of Memphis musicians and singers and make it pay off.

Throughout the audition, Otis quietly but persistently suggested he be allowed to sing, too—an idea that simply fell on deaf ears. At the end of the session, Stewart finally gave in to Otis’s pleas and the young kid from Macon belted out in the best traditions of his musical idol. Oops. Stewart all but stopped him dead in his tracks and told him to try his hand at a ballad. Somewhat embarrassed, Otis said he did have a self composed ballad, These Arms of Mine and volunteered to sing it instead. It didn’t make waves. Stewart felt it was too country-influenced to appeal to the urban market he had targeted. But for some reason, the song was released anyway—even though Stewart said, no one in the studio flipped over it.

Otis’s new song, however, became almost an immediate success. Stewart, to no one’s surprise, signed Otis to a long-term contract with Volt Records, a subsidiary of Stax. Otis wrote and helped to arrange a long list of emotionally fulfilling and creative recordings, aided by Isaac Hayes on piano, the Barkays and the MG’s (Booker T. Jones on organ, Steve Cropper on guitar, Duck Dunn on bass and Al Jackson on drums).

His compositions included Mr. Pitiful, I’ve Been Loving You Too Long, and Aretha Franklin’s famous Respect — all of them helped to define the Memphis Sound. The late drummer Al Jackson, once recalled having a talk with Otis about life—the kind of earnest yet playful talk close friends sometimes have. “I said, what are you griping about! You’re on the road all the time, all you can look for is a little respect when you get home.” The last line set the stage for Aretha’s chartbuster.

Otis wrote most of the horn lines on his recordings, which some believe explains the smooth interaction between his voice and the instruments. In fact, the horns and reeds on his recordings sound like extensions of his own voice, as he uses them to punctuate emotional passages and give a running commentary on the lyric. His songs, in fact, were created in a collaborative manner similar to the MG’s, who worked off each other’s riffs rather than follow charts. Otis’s ability to improvise was always put to good use during recording sessions. When Stax decided Otis should record the Rolling Stones’s Satisfaction, the final product was a classic Redding interpretation. The MG’s Steve Cropper remembered, “We listened to the (Rolling Stones’s) record five minutes before we recorded it. I copied down what I thought the lyrics were and handed the piece of paper to Otis. Before we got through, he threw the paper on the floor.”

During his days at Stax, Otis also started his own publishing company, Redwal Music, and a record label, Jotis, distributed by Stax. He worked to groom several performers. His greatest success was the honing of Arthur Conley, a rough baritone, who recorded Sweet Soul Music; Otis’s powerhouse tribute to the Memphis Sound.

By 1966, his acceptance among urban and rural blacks rivaled James Brown and many of the Motown acts. While commercial success in America’s pop mainstream eluded him for quite some time, he was popular in England and France, where fans honored him as one of their own.

His break into the pop field occurred at the same time and at the same place as it did for Jimi Hendrix — at the Monterey Pop Festival in 1967. Otis was on the bill with Janis Joplin, Simon and Garfunkel, Jefferson Airplane and the Who.

This commercial success brought him the long awaited financial rewards — enough to buy a private plane that soon thereafter would fall out of the Wisconsin sky and bring his life to an abrupt end.

Otis’s funeral was held in the Macon County Auditorium where 4500 fans flocked to pay final tribute.

Otis Redding has been immortalized on wax. Among the most memorable long playing albums are: History of Otis Redding(1967), Otis Blue(1965), In Person At The Whiskey A Go-Go, and Otis Redding/Jimi Hendrix At The Monterey Pop Festival.