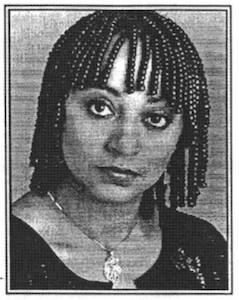 From the moment you enter the Harlem School of the Arts Theatre, 645 St. Nicholas Ave, on Sundays around 3 pm, until the time you leave, you know there is something special happening here. The theater space draws its life from the energy, excitement and good vibrations of its hosts— the cast and crew of the play Ms. Hazel’s House of Heavenly Rest.

Arrive a little early and you may witness Ms. Hazel Smith — the writer, director, producer, set designer, paymaster and one-woman orchestrator — putting all the pieces together in preparation for another smooth performance. Moving to and fro with balletic grace: helping to set up the stage, next to set up the box office, and next on to set up the refreshment table. Ms. Hazel is obviously in her element and thrilled about being there. “I love everything about this theater experience from coffee brewer and floor sweeper to the more prestigious positions of director and producer.” But the highlight of any performance day for her is watching the cast and crew arrive with the same enthusiasm mirrored on their faces as is etched on her soul. “Seeing people coming to do what they love doing makes the struggle worthwhile,” said Hazel smiling. At the top of the play, following the prologue, Hazel expressively signs (speaks through sign language) along with the recording Wonderful One by Vanessa Bell Armstrong. However incongruous to what follows, it is a beautiful and original opening.

What follows is a fast paced funereal satire featuring the talents of seven veteran performers, all with impeccable comic timing. A “funereal satire” may sound contradictory if not a tad morbid, but it is refreshingly neither. Instead, it’s a light look at one of life’s graver sides, making the final arrangements for a loved one. Hazel decided on a funeral home for the setting of a raucous comedy after having been responsible for making final arrangements for both of her parents and grandmother within a short time span of each other. She learned most acutely then how “laughter can heal a heavy heart,” and hopes that this play will help others to face life’s heavier trials with humor and hope.

“It’s necessary that we write. We all have stories”, she told me after explaining that the subject of her plays is drawn from personal experiences. Her first script, Time For Coming Out was born from years of experience in working closely with young adults. Its theme is targeted at helping young boys and girls make that often rocky transition through puberty. Each of her plays, including the two still in the typewriter, is written for the community,

“A play must be scripted in truth,” says Hazel “Our neighbors and peers know the difference between the truth and the commercial fare often seen on Broadway. By sharing our personal experiences through community theater, we address and hopefully help resolve some pressing community issue(s). It’s not intended for universal entertainment alone; if it’s done right, it will instruct and uplift a specific group. Because its intent is not to cater to critics, it can’t fall prey to them. The community is where the heart of theater is.”

Hazel’s commitment, to helping people — somebody as her production company’s name, HS (Help Somebody) suggests — was honored in 1985 when she was the recipient of “The Presidential Recognition Award for Community Service.”

When asked about the problems faced in keeping this production alive, Hazel explains without complaint, “the only problem is, as with many other theatres, a lack of necessary funds for audience development. We are not funded by grants or fellowships — I’m the sole financier of this venture.”

I asked Hazel how she kept so positive and focused in such a risky, non-lucrative business. “I must thank two people who are helping along the way, Gertrude Jeanette who initially produced Ms. Hazel’s House at the Hadley Players, and special thanks to Grace Jones, of Touch of Grace, for continuing to be my bridge over troubled waters. I, also, walk on my faith. Whatever you really want in life, you just claim it. Act on it, make it yours, take that first step and the next one is gonna come. I just believe the Lord is going to get me through. He has never let me down.”