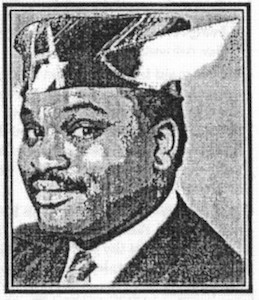 In the glitzy, garish business of show, you’ve got to be pretty outstanding to stand out. Arnold Pinnix does exactly that whenever he dons the apparel and assumes the persona of Arnold, the Drug Free Recruiter. Standing on the corners of New York City streets, wearing the Winged Crown, a Kufi made out of vintage ties, with silver wings; a black tailcoat with gold epaulets and iridescent anti-drug messages scribbled on it; buttons; and luminous pale green trousers tucked into red, felt covered brogans, Arnold rouses the curiosity of most passersby. But instead of avoiding him they walk over to him to find out what he is promoting. Arnold uses his colorful and comical getup as a lure to attract and recruit young people into his drug fighting organization called Army Against Drugs, a not-for-profit organization. That organization teaches youngsters to fight drugs by staying drug free.

Arnold, in his patented costume and character, also takes on drug-bred crime through a comic video which has an accompanying comic book that describes the scenes. The video and the comic book, suitable for grades K through 6, are used to teach children to read. It’s the first of its kind, anti it stars Arnold as Arnold, the Drug Free Recruiter, a super hero.

Arnold thought of the idea of using young people to fight drugs nearly two years ago when he returned La North Carolina from New York where he lived for 5 years. “I needed Lime and a comforting place to regroup and recoup from the harrowing experience of helping a very talented friend kick drugs,” he says. “He’s the one who designed my trademark Winged Crown.” It was a long and arduous attempt, one that was working well, so Arnold thought, until his friend threatened his life.

This experience made Arnold decide to adopt the old adage “an ounce of prevention is worth a pound of cure,” and he made it the heart of his crusade to promote drug prevention in North Carolina. The crusade included a weekly radio talk show called Teen Talk, where teens could air their concerns and discuss the importance of parental awareness and involvement. Arnold hosted the show for more than a year.

Arnold returned to New York refreshed and with a lot of energy to recruit New York’s children into his Army. He began a teen talk show (91.5 FM at 3:00pm, on Sundays) here too, but it due to lack of funds it ended, shortly after it began. Fortunately, however, it is being revived by a local television program in association with the Police Athletic League.

Arnold is also involved in another noteworthy endeavor. He is producing The Peacemaker, his award winning play based on the life of Dr. Martin Luther King, Jr. In 1986, it won the Lorraine Hansberry Playwriting Award and the David Library Playwriting Award. Broadway Publishing is scheduled to published it later this year. The proceeds from the play will go to Arnold’s Army Against Drugs.

The Peacemaker is back in New York for a limited run, from January 20th, tho official holiday of Dr. King’s birthday, through February 24th, at the Judith Anderson Theatre, 416 West 42nd Street. The play explores the public and private lives of our most celebrated man of peace. Its novelty lies in the surrealistic presentation of a postmortem Dr. King recounting the events that make for a restless soul. The opening scene, a bitter quarrel between Martin and Corolla, his wife is shocking and maybe offensive. This is not the play on.: would ordinarily expect to sec about such a prominent American figure. It depicts discordance in what is, generally, perceived as a holy union. But discordance gives this unique production its power and beauty. It humanizes Dr. King.

Dr. King was a man, and like any man, every man: he did not always agree with his wife; he would forever be his father’s boy; he smoked on occasion; drank on occasion; entertained his lascivious nature on occasion. Dr. King was a man and like every man bad a dream and the drive to attain that dream. He was a great man because he tapped that fountain of purpose bubbling deep within each of us.

Pinnix explained: “I am trying to keep Dr. King’s dream alive for young people, who were not fortunate enough to be alive when he was alive. King provided us with a base, a foundation that instilled pride and gave us strength to fight prejudice and discrimination. I, too, want to build a base, instill pride and give strength to today’s youth to help them fight against drugs and crime. I hope to inspire them to find their particular purpose In life. We each have a special talent. Greatness is within our reach because it is the result of finding and working toward our dreams.”

Also in this issue: Four Steps Down

If you are interested in the original layout, here is a PDF of this January 1992 issue of ROUTES.