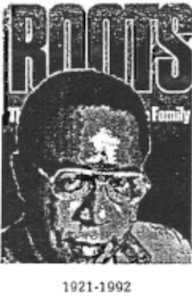 As I was getting ready to go to class the morning after my return from Paris, I turned on the radio and learned that Alex Haley had passed. I stopped whatever I was doing. For a moment, I stood still to pay tribute.

As a writer, Haley touched a very important nerve not just here in America but all across the world. At the Paris conference, someone said that when Roots was televised in France, the French learned what the experience of slavery truly meant to African-Americans.

I took my undergraduate students at New York University to the library to do research on Haley. Some of them bad never beard of him. When I thought about it, I realized that most of them were only three years old in 1976 when Roots was published. The young must know their heritage Haley created a testament to that idea. He was an American griot who kept our history and ancestral connections alive with his words. He taught us to be proud of ourselves and to revere the past as we move forward to meet and 1921-1992

Publisher’s Note: conquer the challenges of today.  ROUTES was born from the seed and the spirit that Alex Haley’s landmark novel engendered. After seeing Roots on television, I felt something momentous had happened and I wanted to pick up the banner and take it forward. But I didn’t want to repeat or imitate what Haley had done. So with my wife Agnes, I conceived of the name “Routes” which sounds the same as Haley’s novel but presents another idea, another focus oriented toward the future. Alex Haley gave us a beginning, but we needed to think about moving forward from that initial point. What route to take? I’m also a firm believer that more than one route is permissible; more than one route leads home.

Customs Agent: What was the purpose of your trip?

Barbara Lewis: I went to France to write about a conference.

CA: What kind of conference was it?

BL: It was about African-American writers in Europe. Writers like Baldwin and Wright and Himes.

CA: Never heard of them. It couldn’t have been a very long conference.

BL: It started on Wednesday and it’s ending today. But it’s still going on. I left early because I have to be in the classroom tomorrow. I had to get back to teach.

CA: Where do you teach?

CA: What do you teach?

BL: English. The person doing the inspecting, a woman, dark-haired and young and petite, looks at the books I purchased in Paris.

BL: Yes. She stares at my hair which hangs to the middle of my back.

CA: What are you?, she asks, puzzled.

BL: I’m African-American. She smiles and irony collects and crinkles in the corners of her mouth.

CA: Where in Africa are your people from?

BL: “I don’t know. My people came here almost 5 centuries ago. They’ve been here ever since.”

Who are we? Henry Louis Gates, perhaps the nation’s leading African-American scholar now at Harvard, said at the conference’s opening reception at an extension of the Sorbonne in Paris, that “we’re unsure of who we are. That’s why we keep changing our name every fifty years or so, “be said”.

As soon as an African-American comes within sighting distance of the barrier separating unacceptable from acceptable, that person must, snake like, shed his or her skin, his or her identity. To be African-American and accomplished, even in a minor way, is soon in this society as a contradiction in terms.

A case in point: when I told someone at Now York University that I was going to Paris for a five-day conference, that person asked me if I was going as a courier? “No, I don’t think so,” I replied. “Well, maybe you don’t know about this,” my temporary companion was eager to inform me. “You can go to Paris for $99 if you carry someone else’s baggage.”

I didn’t even hesitate in my response. “I can hardly handle my own baggage. Why would I even consider taking someone else’s?” Later, after I puzzled over the origin of that comment, I realized that it is difficult for many Americans to conceive of an African-American as someone who has his or her own bags to carry.

The first Friday in February I was on my way to purchase a theater ticket in Paris. I saw some unique painted wooden barrettes in a shop window near the Odeon Theatre which was my destination. I went in with a friend, Francine Wilson, a labor historian at East Michigan University connected with Harvard’s DuBois’s Institute. I stood in front of the case where the barrettes and pins were displayed in the shop which also doubled as a gallery for art and sculpture.

There were two women in the store. One had a mid-section as large and formless as the trunk of an aged oak. She was conversing with a woman dressed in pale green. They paid me little attention. They’re not very eager for a sale, I thought.

Finally, the larger woman approached me. I pointed to the barrette that I wanted and asked her in French if I might see it.

“That’s not a barrette,” she said, “It’s a pin.” Disappointment registered on my face. “But you can put an elastic around the pin part and wear it as a barrette.” “No, I don’t want to do that.”

She stared at me incredulously, perhaps wondering where I had gotten the nerve to reject her obviously brilliant idea.

“What are you?” she asked. I answered, “Je suis Americaine.” I am an American.

Back issue of Routes, A Guide to Black Entertainment February 17-23, 1992 as PDF