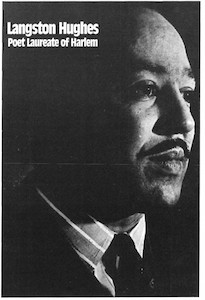 There is an inherent incongruity in the phrase Harlem Renaissance. A period sandwiched between two world wars with a great depression in its middle would hardly be thought of as conducive to a revitalization of the arts and letters.

Yet a renaissance did occur in the urban ghettos of America at this time. With renewed determination and confidence, such distinguished writers as Claude McKay, Countee Cullen and Alain Locke were redefining from a black perspective, the frustrations and aspirations of black people. But the ultimate interpreter of the “new Negro” was the poet Langston Hughes, the period’s most prolific writer.

It was in Langston Hughes’s writings that the Harlem Renaissance reached its apogee. Assuredly, Alain Locke articulated the movement’s purpose by proclaiming “The Negro today wishes to be known. for what he is. . .” and Claude McKay voiced the movement’s defiance with his fiery poem “If We Must Die,” if we must die/O Let us nobly die. But only Langston Hughes succeeded in incorporating the often diverse conceptions of blackness into a coherent whole. “We younger Negro artists who create now intend to express our individual dark-skinned selves without fear or shame. If white people are pleased, we are glad. If they are not, it doesn’t matter. We know we are beautiful. And ugly too…. We build our temples for tomorrow, strong as we know how, and we stand on top of the mountain, free within ourselves.”

Held as the Poet Laureate of Harlem, James Langston Hughes devoted his forty some-odd-year literary career explaining and illuminating the “Negro” condition as he saw, heard and lived it. Born February 1, 1902, in Joplin, Missouri, Langston was on the move from early on. Before he graduated from high school, he had lived in Buffalo, Cleveland, Lawrence, Kansas City, Topeka, Mexico City, Colorado Springs and Lincoln, Illinois. He was shifted among his mother and father, who separated in his infancy, his proud and strong grandmother, who died when he was 12, foster and real relatives and other friends of the family. Thus, a trend of traveling was set for him that lasted his life long.

Langston had not thought of writing poetry until his predominately non-black classmates elected him class poet and assigned him the responsibility of reading at the grammar school graduation ceremony in Lincoln, Illinois. An only child, books became his best friends and entertainers. His early poems, mostly about love, the slums where he had lived and “the brown girls from the South .. .,” imitated the style of his favorite poet, Paul Lawrence Dunbar.

After graduation from Central High School in Cleveland, Langston, having a great desire to see the much heralded Harlem, persuaded his father to send him to Columbia University.

At Columbia, Langston met discrimination at the campus’s Hartley Hall and among the staffers on the school’s newspaper. He found that he disliked the bigness of Columbia. He also hated its students and its courses. So after a year he quit. This decision severed the one weak tie which had held him and his father together.

In 1923, at the age of 21, Langston went to sea as a mess boy aboard the S.S. Malone bound for Africa. Taking his first glimpse of the continent, Langston wrote, “When I saw the dust-green hills in the sunlight, something took hold of me inside. My Africa, Motherland of Negro peoples! And me a Negro! Africa! The real thing”

In 1924, Langston, the wanderer, wound up in Paris working as a dishwasher at the famous French nightclub Le Grand Duc. Here he saw and met some of the greatest black musicians, singers and entertainers of that time. Among them were Bricket Smith and Buddy Gilmore.

Langston’s deep love for music, particularly jazz and the blues, had a strong influence on his poetry. Many of his poems follow the blues pattern, which he explains as a verse with one long line repeated and a third line to thyme with the first two, The mood is usually despondent but when they are sung, people laugh.

Four months later, Langston landed back in the States. Pressed for cash, he was forced to take on a variety of menial jobs. While working as a busboy at Washington D.C.’s Wardman Park Hotel, Langston saw the poet Vachel Lindsay, in town fora reading, arrive for dinner. Quickly writing three of his poems on a scrap of paper, he laid it by the eminent poet’s plate and rushed away. That night, to Langston’s surprise, Lindsay read the poems during his performance. The next day, reporters were waiting at the Wardman to interview the “Negro busboy poet.”

In the same year, 1925, he won first prize in Opportunity Magazine’s poetry contest with his poem, “The Weary Blues.” He also won a literary prize in the Crisis sponsored contest. In 1926, he published his first volume of poetry, entitled “The Weary Blues,” and in the second semester of the 1925-26 school year, he received a scholarship and entered Lincoln University.

Until this time, Langston’s work had been published only in black publications, primarily the Crisis and the Opportunity. But now he began selling individual poems to Vanity Fair, New Republic and The Bookman.

Langston’s poem “Harlem,” from which playwright Lorraine Hansberry got the title for her award-winning play A Raisin in the Sun, is the one for which he is best remembered. In the way of prose, Langston has written much, but his most outstanding stories are those about the character he created, Jesse B, Simple-or Simple as he is often called. Simple first appeared in a series of columns which Langston wrote for the Chicago Defender. He is, said Langston, like a great many people-although the stories are about no specific person as such.

In these stories, humor is most often derived from long lists, verbal plays, comical ways of stating the miscellaneous truths of discrimination and tall-tale exuberance. Simple says things like “I have been fired, laid off, Jim Crowed, segregated, barred out, insulted, eliminated, called black, yellow and red, locked in, locked out, locked up, also left holding the bag. I have been caught in the rain, caught in raids, caught short with my rent, and caught with another man’s wife, but I am still here!”

In addition to being a poet and writing short stories, Langston was a novelist, author of a two-volume autobiography and ten children’s books in both verse and prose, a playwright, a translator of literary works written in Spanish and French, an editor of literary anthologies of American and African writers and the author of operatic librettos, of a Christmas cantata and lyrics for dramatic musicals.

He also wrote numerous radio and television scripts and was the lyricist for a long list of songs—some of which have been sung by leading concert artists, while others have been used on radio programs and in motion pictures. He frequently wrote articles and essays on various subjects for many magazines, newspapers and journals. Langston also served as a newspaper columnist for the Chicago Defender and the New York Post and as a correspondent in Spain, during the Spanish Civil War, for the Baltimore Afro-American.

Langston received the Harmon Gold Award for Literature (1931), a Guggenheim Fellowship (1935), the Anisfield-Wolfe Award (1953), the Spingarn Medal (1960). He had traveled extensively world-wide and was quoted before his death in 1967 as saying that his interest had “broadened ‘from Harlem and the American Negro to include an interest in all the colored peoples of the world-in fact, in all people of the world, as I related to them, and they to me.”

See the complete issue of Routes, A Guide to Black Entertainment November 23, 1993  as PDF