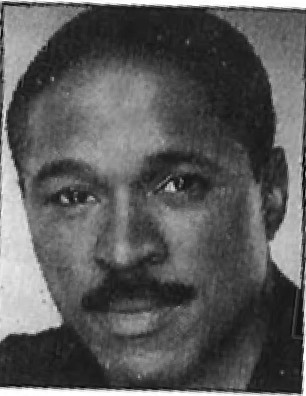 Baby, I Need Your Loving, My Girlfriend, I Only Have Eyes For You, Sitting In The Park, You’ve Lost That Loving Feeling, If I Ruled The World, Stay In My Corner, Try A Little Tenderness, It’s Just A Matter of Time.

If you heard those songs sung by four tan and terrific young men, would your troubles slip from your shoulders and fall to the floor like an old coat? Would memories of dancing closer than close in low ceiling basements in the glow of a single red bulb come flooding back to your mind’s eye? Would you feel all liquid, warm and dewy inside? Would your brain get dizzy with thoughts of lovers you’ve lost? Would your lips be stretched wide in an irrepressible smile? The answer to all the above questions would be a shoulder-swaying, uninhibited yes if you’d been lucky enough to see Do Wop Love, an unforgettable ninety-minute show whose title doesn’t do it justice — as if anything could.

Now at the Billie Holiday Theatre through July 4, the show is moving to the National Black Theatre on July 8, but tickets won’t be available until the 16th. The show is that hot. Discussion is underway for a national tour and there’s even talk of taking the show to Japan. Part of the reason for the show’s immense appeal has to be the four men in Do Wop Love who do everything they can to please the audience. Cornelius Bates (bass), Darren Frazier (baritone), Frederick Owens (tenor), and Kevin Smith (tenor), didn’t grow up with this music. They’re too young. But they add a hint of something new to these classics, making them breathe with the pulse of today. Mix in an imitation of James Brown complete with wig and lined cape before intermission, shake well with the kind of romantic, respectful lyrics that used to make women feel proud and happy to be women and you’ll know why the audience just couldn’t get enough of these four young men who outdid themselves in their efforts to satisfy.

The singing in Do Wop Love is so good it makes you want to skip back to your seat after intermission. How can this get any better, you ask yourself. But Bates, Frazier, Robinson, and Smith, each a virtuoso in his own right with a voice good enough to go solo, exceed all expectations, and leave the audience delighted and hollering for more. Do Wop Love is a musical that targets the heart, keeping every audience member rapt to the very last note.

When the house lights came on the other night after the finale of Do Wop Love, the audience just sat there in the theatre eager for the good sounds to keep on keeping on. They were clearly hungry for another taste. Not that their appetites hadn’t been well satisfied. No one could say that. Just the opposite. It had been so long since their entertainment plates had been piled so high with such rich, luscious and delicious love songs that they realized how much they’d been missing and were determined not to miss anymore. The musical had done more than rekindle their hearts; it had set them on fire and nothing except more of the same could put out the flame. Do Wop Love, a musical revue that pays tribute to the harmonies and genius of black popular music of the last 30 years, is one hell of a show, the best grass-roots black musical to come along in a long time.

Ron Wyche, the creator and director, definitely knows how to tease and please a crowd, but he knows more than that. He can tell a story too. This is not one of those inane, plotless musicals that’s only a limp excuse to weave some songs together. Granted, the plot is slim. But who needs complication? This is a simple but poignant story of love and loss, of growing up black and male on hard city pavements and shielding the tender spots hidden underneath the veneer of surface strength.

Do Wop Love which premiered in 1989 at Sweetwaters and then moved to the National Black Theatre, was Wyche’s first foray into writing for the stage. A later play, Satan Never Sleeps, was produced at the Billie Holiday in 1991 and at Riverside Church in 1992. In Detroit where he belonged to a community theatre group, Wyche wrote radio dramas and hosted a children’s show for ABC. A seasoned performer in his own right, he appeared in Vernel Bagneris’ One Mo’ Time at The Village Gate, later touring Australia. He has also done commercials and started his professional life in New York as a dancer. But now his eye and mind are turned to writing. Two other Wyche plays, Blues Train and Love Don’t Love Nobody will be produced in Manhattan this coming season.

“I wasn’t going to sit around bemoaning the lack of opportunities for actors, so I decided to create an opportunity. I didn’t want to be mad all the time waitin’ on somebody to give me a job,” Wyche said as he sipped tea in his Central Park West apartment on a recent rain-splashed afternoon. He was describing how the idea for Do Wop Love evolved. Two reasons prompted his desire to become a writer: empowerment and a concern for images. “I ain’t doin’ this for a hobby,” Wyche said modestly. “I want to put something out there that I think is important. So even though this is a musical revue, it still has stories. Almost every black man I see in the media has his head bowed down and he’s handcuffed. I wanted to show black men in amore positive light.”

The premise for Do Wop Love is built around four friends who grew up together and vowed never to lose touch with each other. They keep coming back to the block to reminisce about their youth. Wyche refers to such works as “nostalgic revues” because of their effect on people. “Actually,”  he said, “We’re always living in two time dimensions at the same time because as you’re sitting  here talking to & me right now, a certain song can come on the radio and, you’ll be living in the moment of that song.” That’s the reason he doesn’t list the numbers in the playbill. “If you don’t know what song is coming next, the impact is doubled,” he says. He used fictitious names and events to tie the songs together. “I write very simple stuff. It’s simple but it’s what everybody can relate to,” he said, “and that’s the most powerful thing in the world.”

Wyche is willing to take risks, but he leaves little to chance. Love Through The Ages was the original working title for this musical which weaves together some of the most popular love ballads from the 50s, 60s, and 70s. Wyche hired Herbert Rawlings, Jr., a ’50s-’60s music specialist, “A human computer,” he calls him, to cross-reference all the major hits and artists with the appropriate periods; then he started “mixing and matching” the songs he liked best. To make the concept more cohesive, Wyche (with a little help from Rawlings) wrote a love story about breaking up and getting back together and changed the title to Do Wop Love.

Wyche describes the musical as a “feel good show” that deals with “good and bad moments.” It also harkens back to a time when songs sung primarily by black men had special meaning. Most of the songs  in Do Wop Love, despite the fifties flavor of the title, derive from the sixties, an important transitional point when many critical political and cultural changes were rapidly taking place in the world, especially from the perspective of African Americans. It’s a time we should remember, a time when harmony was stressed not only musically, but socially as well.

Broadway has already come calling, but Wyche says that’s not his primary goal. He’s got another agenda, another angle. “I don’t write with Broadway in mind. Shows like Mamma I Want To Sing and Beauty Shop at the Beacon have made it clear that there’s an audience out there that wants to be entertained. We can do that without going to Broadway.”

See the complete issue of Routes, A Guide to Black Entertainment July 6, 1993 as PDF.