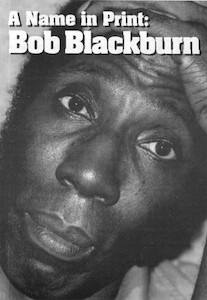 Enjoy this archived edition of ROUTES, A Guide to Black Entertainment from November 8-21, 1994 featuring award-winning printmaker and lithographer Bob Blackburn.

The John D. and Catherine T. MacArthur Awards, also known as Genius Awards,” are awarded annually to creative individuals in several fields, awarding them up to $375,000, to be spent, over a five-year period, as the recipient wishes. One cannot personally apply for these awards”winners are determined by a committee within the Foundation. Since 1982, there have been over 350 Award winners. ROUTES wishes to recognize the 46 African-American winners for their achievements. The second recipient we are featuring is master printmaker/lithographer Bob Blackburn. (Ellen Stewart of La MaMa, E. T. C.  was the first.)

In Africa, Bob Blackburn is called FigTree”an honor bestowed on one who casts a shadow of wisdom, knowledge, and experience that covers all who have learned from him. Throughout the world, Bob’s shadow has been cast upon many hundreds of artists, lithographers and young students who have benefited from the lifetime of experience and expertise provided by this gifted and prolific man”an international institution in the world of printmaking and lithography.

In 1992, Bob was informed that he was a winner of the John D. and Catherine T. MacArthur Award, chosen from over 300 nominations that are received and processed each year. It not only recognized his life’s work and achievements, but also created an opportunity, as Bob says, to be freed up, to relax a little bit; to take it easier doing the work of the workshop, especially to help the young kids achieve their dreams.

Blackburn has been pursuing his own dream since he moved from his birthplace in Summit, New Jersey to Harlem at the age of six. Growing up in the center of African-American art and culture with little or no money to pursue his art, Bob mopped floors to pay for the training and inspiration he received from nationally renowned painters and printmakers in the city.

During his years at the DeWitt Clinton high school, he became art director for The Magpie, the school literary magazine, and learned printmaking in the lithography class under Riva Halford, at the Harlem Community Arts Center, as part of a Works Progress Administration (WPA) project.

Bob learned how to work with art students at the Uptown Community Workshop, which was frequented by such fellow artists and writers as Langston Hughes, Jacob Lawrence, and Richard Wright.

In 1941, Blackburn won a scholarship to the Art Students League, where he pursued more advanced study in lithography and painting, under the expertise of master printmaker Will Barnett and painter Václav Vytlacil. Barnett was later to help Bob to become the first African-American faculty member at Cooper Union, Where he taught in the Graphic Workshop from 1949 to 1967. After completing a Whitney Fellowship at in France, Bob accepted a position as master printmaker at Universal Limited Arts Editions with Tatyana Grosman in West Islip, Long Island. In his first five years there, he produced lithographs from many major American painters, including Jasper Johns and Grace Hartigan.

While on his way to becoming one of America’s greatest lithographers, Blackburn also dreamed of giving something back, to help the many young artists who have their own dreams, and to give them something to believe in. So in 1948, he founded the Printmaking Workshop, a nonprofit institution that provides a nurturing, 8000 square-foot educational workplace for over 900 students a year and which has hosted acclaimed artists Faith Ringgold, Grace Hartigen, Al Lovin˜ and Mel Edwards. Once again mentor Will Barnett became an integral part of Blackburns dreams, helping him to found of the workshop and serving as the chairman of the board.

Bob’s workshop is exactly that — a place for artists, scholars and printmakers from around the world to study, consult, develop their art and learn from the Masters. Located at 55 W. 17th St. in Manhattan, the workshop, while intentionally avoiding the look of a slick commercial studio, provides instruction in etching, lithography, and mono-prints; keeps the cost of making prints affordable; houses a gallery of works by resident artists; retains a print collection over 4000; has a guest artist program and a community outreach program that sends art teachers, with materials and presses, to schools and libraries throughout the city; grants numerous scholarships; supervised the production of artists additions by Will Barnett, Romare Bearden and Benny Andrews, as well as assembled showings, and connected colleagues and studios throughout Africa, China and the United States. Bob’s shadow is truly cast over the globe.

Although the vast majority of the MacArthur Awards funds have been spent on the Printmakers Workshop, Bob is acutely aware of the need for constant fundraising. He won a national endowment for the arts grant which he has used to provide additional funds for the Workshop˜s mission. The Workshop is funded primarily by the New York State Council on the Arts, the National Endowment for the Arts, and small workshop fees. The workshop has survived financial crises before, like when the New York State Council on the Arts funds once dried up. But Bob’s international network of artists were not about to let his institution die. Many artists over the years have help support Bob’s efforts, including Jacob Lawrence and Riva Helfond.

Bob’s credentials and honors amassed over the years read like the accomplishments of Dozen of artists, craftsman, scholars, and entrepreneurs: he has been on the faculty of New York University, Pratt Institute and Columbia University; lectured at Trinity College, Rutgers University and Montclair State College; recipient of Purchase Awards from the Library of Congress, the New York State Council on the Arts, and the Audubon Artists Exhibition; winner of the Skowhegan School of Painting and Sculpture Award, recipient of honorary doctorate degrees from several universities, including the Maryland art Institute, the Parsons School of Design, City College and the New York School of Social Research; and has had his art exhibited throughout North America.

Ask Bob, if winning the 1992 MacArthur award has caused him to consider going off, perhaps to Vermont, to spend more time working on his own art and he’ll tell you that going off is a dangerous thing. One goes off to pasture and usually dies.

Today, at the tender age of 73, with a career spanning six decades, Bob refuses to sit back on his many laurels — there are too many promising students to see, too many exhibitions to coordinate and too many international artists to network with. His New York area exhibits can be found at New York University, the Bronx Museum of the Arts and the United Negro College Fund. In addition, Bob’s involvement with these arts programs include supporting exhibitions at the Jamaica Arts Center the Alternative Museum in Soho, the Studio Museum in Harlem, the Cinque Gallery and the Kenkeleba Gallery House Gallery. As he continues to support countless individuals and organizations, he also pursues tax deductible contributions which, he says he’ll Accept with both hands and feet.

The debate among MacArthur Foundation insiders is ever present: whether the mission of the Foundation is to provide awards for achievement or to encourage under developed talent. Bob Blackburn would have won regardless.

See the complete issue of ROUTES, A Guide to Black Entertainment November 8-21, 1994 as PDF.

This issue is part of the 1990 revived ROUTES magazine in shorter, black and white format.