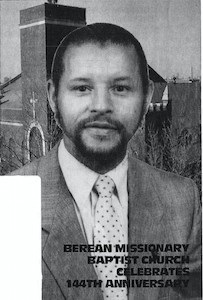 Please compare every word to the original. Your software made some creative changes!

That simple formula comes from one of his sermons, and it describes perfectly the thinking that made Dr. Arlee Griffin, Jr. such a dynamic force in his community. As the pastor of Brooklyn’s Berean missionary Baptist Church Dr. Griffin is committed to the betterment of his community, but that is a particularly tough job these days, because mutual trust and open doors are no longer the norm.

Today, the mission of a church stretch beyond meeting the spiritual needs of its parishioners — fitness also encompass a healing of the entire community. The bad looking property is an ongoing one, and it has been for by churches for centuries but today’s Society has created such hostility that many communities are simply falling apart; people like themselves in their houses and even churches are often forced to close their doors for fear of vandalism or theft. All too aware of the social decay that surrounds him, Pastor Griffin realizes that he must dig deep into the soul of his people to heal the Earls, and he knows that it will take all the strength and perseverance he can muster. “Often times, changes quite painful,” he says. “Without God, we can’t – without us, God won’t.”

When Dr. Griffin came to Berean five years ago, he brought with him a desire and commitment to pursue excellence in the practice of a holistic ministry, one design to meet and serve the needs of the total person. Proverbs 29:18 tells us that “where there is no vision, the people perish,” and, every mindful of that Pastor Griffin has a visionary passion for kingdom-Building. Among his dreams is the completion of green gardens, a 77-unit housing complex for seniors, and the educational and family life Center, which will benefit the entire community, and for which there is no need. As he moves Tashi is Brooklyn community and prepare it for a brighter tomorrow, Pastor Griffin is perpetuating a mission it began when Billy Berean was founded 144 years ago.

The date was August 11, 1850, and the abolitionist movement was in full swing. Green-once known as “a little church on the hill” long-was originally an interracial congregation, but, because access to the church required a client, many of its members have difficulty attending services. So who climb the hill apparently not the white members, for the Berean Church became a black church. The river in signing Bundick, former pastor of Brooklyn’s Concorde Baptist church, became billions first black minister.

A powerful, vibrant spirit keep the church going in those days, and even when the little church on the hill was totally destroyed, just before the turn of the century, Dr. Leonard G. Brown, it’s Pastor, was quick to organize a glorious resurrection. 100 years ago, the Marine Baptist Church purchased its present site and directed on it the brick building that still stands. It was the first time in New York City’s history that a black congregation has built its own church from the foundation.

In 1929, under the pasture right of Dr. Schuler t. Eldridge, a $20,000 brake percentage was added. It’s basement house and a kindergarten and facilities for Sunday school and other church activities. It was the dawn of the greater the great depression, which SWM was felt by the building community. Responding to the needs of his parishioners, Pastor Eldridge established food and clothing pantries. The gratefulness of his congregation is heard whenever the church is currently on Nick Bell’s Pio, for they were installed in his honor.

National and, indeed, international recognition came to Berean under the pastorate of Reverend Hylton B. James, under his leadership of the church experienced phenomenal growth. Dr. James’s missionaries you inspire the church to establish foreign missions through the lot carry foreign missions convention, the national Baptist conventions, and the American Baptist churches organization. A home missions program included assistance to the needy, regular visitations, and the conduct of services in nursing and convalescent homes. Reverend James also founded the marine Bible institute, which offers a full curriculums of accredited courses with all spec aspects of Christian faith.

The rapid growth of the church necessity for the expansion of its facilities. On April 9, 1961, the new building was completed and the institution became known Berean missionary Baptist Church. Under this banner and 30 years of a dynamic leader ship by Pastor James, the church gained a national reputation for excellence. A man of Dr. Jameses caliber is not easily replaced, and so, when he passed away Dash during a 1978 Prius service Dash the marine church went for two years without an official shepherd. That period ended in 1981, when the Reverend Gus Roman came from Philadelphia and took over the reins. He immediately said course for inner revitalization, envisioning an even more caring and compassionate church, one that fostered spiritually and socially sent you the ministries with a strong emphasis on Christian education. The marine Bible institute was expanded to five satellite organizations in Brooklyn and Queens, with further out reach through a correspondence curriculum-devotional life was strengthened by adding a prayer tower to the prayer ministry, and economic Independence was encouraged through mutual financial assistance and support in the form of Berean Credit union.

Pastor Roman was in the Vanguard when it came to addressing the communities social problems. He provided summer youth employment opportunities, pumped a new life into a poster Eldridge’s emergency clothing and food bank, established a career counseling and referral program and — when relationships with a 77th Precinct threaten to collapse —sponsored the first community and police Department breakfast.

In 1988, Reverend Roman left Berean to return to Philadelphia and thee mantel was handed to Dr. Griffin who looks back on Berean’s illustrious history and continues its traditions will also forging new paths. He has established new ministries who’s missions reflect the current social scene: a prison ministry, immediate ministry, and AIDS ministry. There is also the Berean legal clinic, a public relations committee, and a young adult ministry. Yes, society has changed, and Pastor Griffin knows that this church much change with it. Pastor Please people does indeed a good progress, and today the progress includes the Berean Gardens senior citizens housing project, for which ground-breaking ceremony was held two months ago. As this project rises from the ground, Dr. Griffin and his church focus on the educational and family life Center in whose $6 million edifice Berean’s ever-growing ministries will find a home; this improvement is currently in the pre-preliminary fund raising and planning stages.

Berean members can look back on a glorious past, but there is much work to be done if the church is to overcome the communities social ills. In five short years, Dr. Griffin has contributed a memorable, progressive chapter to the annals of Berean but this beneficiary church, earning a slight rewrite of the formula: Pastor Griffin + Berean: Progress and hope!

Back issue of Routes, A Guide to Black Entertainment August 1994