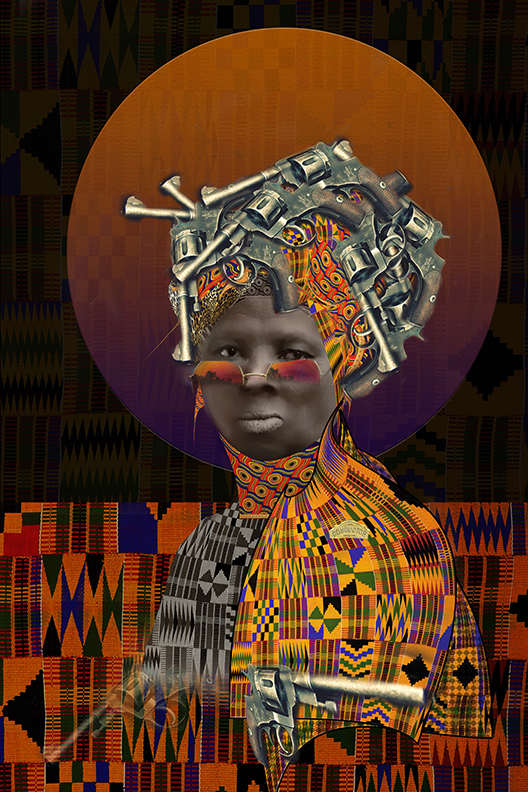 Lisa Dubois is an artist, curator and photographer who was born in Harlem. She received her professional photography degree from the Germain School of Photography, with an award in photojournalism. She also earned a doctorate in Metaphysical Science.

Her first job as a photographer was for The Black American News. Later she went on to do photography for other publications such as The Village Voice, the Daily News and the New York Post. In 2017 she founded the X Gallery. Here she featured the work of many local artists while creating her own art.

Dubois’s work has been shown at the Schomburg Center for Research in Black Culture, the Gordon Parks Museum, and elsewhere. She has been interviewed on BronxNet, Nola TV, and Singleshot about her work.

Her most recent project was as the creative consultant and curator for ArtontheAve.   She is a member of En Foco, a contributor to the Social Documentary Network, and to the Edge of Humanity Magazine.

About the Photoart Collage “If You Hear the Dogs”

The fearless Harriet Tubman inspired me to create a pop artwork honoring the courageous woman I admire most. One day everyone will know who Harriet Tubman is when her likeness is on the twenty dollar bill. Harriet’s trust in God and in herself enabled her to lead approximately 70 enslaved passengers to freedom on the Underground Railroad. Each of those 70 people represents generations of African Americans.

In this piece I focus on the guns Harriet used to protect herself. They were crucial for her survival and in this image I use guns in a symbolic abstract way.

Harriet Tubman was born Araminta Ross on March 6, 1822 in Dorchester County, Maryland and died on March 10, 1913 in Auburn, New York.