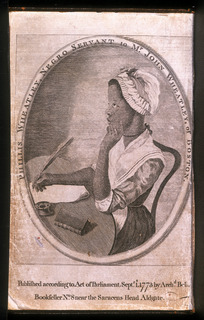 Phillis Wheatley (ca. 1754-1784) was purchased by John Wheatley of Boston for his wife, Susannah, at the Boston Slave Market in 1761. The young girl is thought to have been born in West Africa, probably near Cape Verde, of the Muslim people known as the Fula. Acquired as a domestic slave, Wheatley learned quickly. Her English verse in the end-stopped couplets of Alexander Pope led to her discovery by Boston literary society. Published when Wheatley was seventeen, “œAn Elegiac Poem on the Death of that Celebrated Divine … George Whitefield” caused a popular sensation. Poems on Various Subjects, Religious and Moral appeared in London in the fall of 1773, the first book of poems published by an African American. As poetry was regarded as the highest level of human expression, and blacks were thought incapable of high artistic achievement, many did not believe that Wheatley, “Negro Servant to Mr. John Wheatley, of Boston, in New England,” could have written such verse. However, no fewer than eighteen of Boston’s most distinguished gentlemen pledged to the authorship of her work. Susannah Wheatley died the next year, after she and her husband freed Phillis Wheatley, most likely due to pressure from important English radicals (almost, as Richard Wright says, “œby accident”). Her last years were marked by struggle and poverty; she died at age thirty in a rooming house, deserted by her husband, her sick baby at her side.

Years later, Wheatley was taken up as a symbol by the Abolitionists (Poems on Various Subjects was republished in 1793, 1801, 1802, 1804, 1816, etc.). Her poetry has been comparatively characterized by Arturo Alfonso Schomburg: “There was not great American poetry in the 18th century … and Phillis Wheatley’s poetry was as good as the best American poetry of her age.” Despite her unusual life and national and even international fame, Phillis Wheatley was a slave and yet set apart from other slaves, a poet and yet enchained unlike other poets of her era.