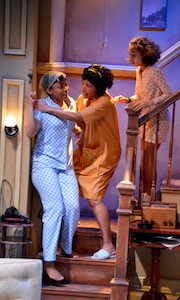 The Effect of Gamma Rays on Man-in-the-Moon Marigolds is the 1964 play written by Paul Zindel. It won the Pulitzer Prize in 1971. A recent production of the play ended its run on March 29, 2015 at The Schoolhouse Theater, a small, Equity theater in Croton Falls, NY.

The story revolves around a dysfunctional family of women, who live on Staten Island, a borough in the City of New York. A school science project of one of the characters gives the play its title.

From the beginning the character dynamic was clear. Beatrice is a past-her-prime-overbearing mother looking after her youngest daughter, Tillie, an inquisitive non-conforming girl with unlocked potential; her tragically vain first-born, Ruth, is afflicted with night terrors; Janice Vickery is Tillie’s only serious contender for winning the high school science project and a senile, incontinent old woman, Nanny, whose origin is unknown but, from whose family she earns a small stipend. What proved exciting to see was the harder-to-find family quirks peppered into the scenes revealing to the audience some of the deeper analogies. The play was a testament to alienation from the big city. More than that, the characters were heavily conflicted—all  wrestled with insecurities spanning generations. With an all-female cast, the play did not appear to have blatant feminist overtones but rather, pointed out feelings of isolation and cynicism towards the public eye that, I think, we all can relate to. Though the play was heavy in symbolism, it did not interfere with character development, but the use of one-sided phone calls, with the audience eavesdropping, said everything one needed to know about the mother.

The performers aptly incorporated all the tenderness, frustration and patience involved in belonging to a family. I found myself heavily invested in the welfare of the characters, especially Beatrice’s, whose cringe-worthy cynicism felt justified and equally pitiful to watch. I was delighted, enraged, hopeful, sorrowful, warmed and invigorated by Beatrice, who was more toxic than the marigolds being exposed to radioactive gamma rays.

A pleasant surprise with this production was that all of the central characters were played by African-American actors. Elizabeth Van Dyke, director, is African-American as well. Perri Gaffney portrayed Beatrice, Kimber Monroe was Tillie, Keona Welch was Ruth. The two secondary roles were cast Caucasian; Susan King portrayed Nanny, and Sage Kitchen portrayed Janice Vickery.

Kyle Thomas 6 years ago
Do NOT follow this link or you will be banned from the site!