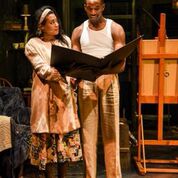 FOR THE LAST TIME is a World Premier jazz musical based on the novel The Marble Faun by Nathaniel Hawthorne, adapted for the stage by Will Pomerantz and Nancy Harrow with music and lyrics by Nancy Harrow. The set, with its two levels of decorative wrought iron fixtures and bridge, and a dynamic eight-piece ensemble perfectly set the tone for this New Orleans 1950’s drama. It opens with a dimly lit musician playing a mournful illocution on his trumpet. Then two players (Kim Exum and Jason Veasey) seductively strut their stuff across the stage until the overseer (Reggie D. White) joins them and invites the audience, in clever verse, to watch the tale unwind. It’s an engaging overture reminiscent of Langston Hughes’ Tambourines to Glory, with White exuding all the intrigue of Langston’s Buddy Lomax (aka Satan).

The entire cast is beautiful in face, voice and performance. In a warm reunion between Miriam (Brittany Campbell) and Hilda (Anita Welch), Miriam captures the look and and feel of a well-adjusted bohemian, while Hilda embodies an innocent, church-going girl seeking adventure. Likewise, Kenyon (Carl Clemons-Hopkins) is silky smooth as a successful French Quarter club owner with his impressive vocal range and perfect pitch, and Donatello (Britton Smith) is adorable as the newly arrived bayou boy, the “epitome of naïveté… The Marble Faun.” The musicians are flawless. The harmonies and choreography are tight and finely tuned. The entire theatre is used, including rear and side door entrances and exits, effectively extending the French Quarter beyond the stage to include the audience in the unfolding drama.

FOR THE LAST TIME has all the makings of a novel, period classic like Porgy & Bess especially with this superb cast, except for the undeveloped book.

The show builds, climaxes and resolves in scenes that raise more questions than they answer in the second half of the play. Hilda is deeply troubled at the top of Act II and asks God for guidance. She receives it and goes to do His bidding only to be dismissed by Kenyon who tells her that nobody cares about the troubles of a Negro in the Quarter during Mardi Gras. I guess he’s right, because in the next scene Hilda and Kenyon are in love and she totally ignores (dismisses) God’s direction. Kenyon decides to leave his dream club to begin an unforeseeable future with Hilda in an unknown place, further underscoring his comment that no one cares about a black man’s plight in the Quarter, least of all them. Donatello loses all innocence in one impetuous act that fills him with heart wrenching angst for about 3-4 songs, then he seems to be good with it and decides to move on. Reggie D. White closes the production like he opened it, addressing the audience, “I guess you all know who I am by now?” When his question is met with silence, he answers, “Maybe not.”

This should not be the last time FOR THE LAST TIME running Tuesday – Sunday at The Clurman Theatre (412 W. 42nd Street) through June 20, 2015. The book should be tweaked to ensure that future productions with stellar casts, musicians, and production qualities, like this one, will run on multiple stages to worldwide accolades the next time and the next.

Perri Gaffney 5 years ago
Do NOT follow this link or you will be banned from the site!