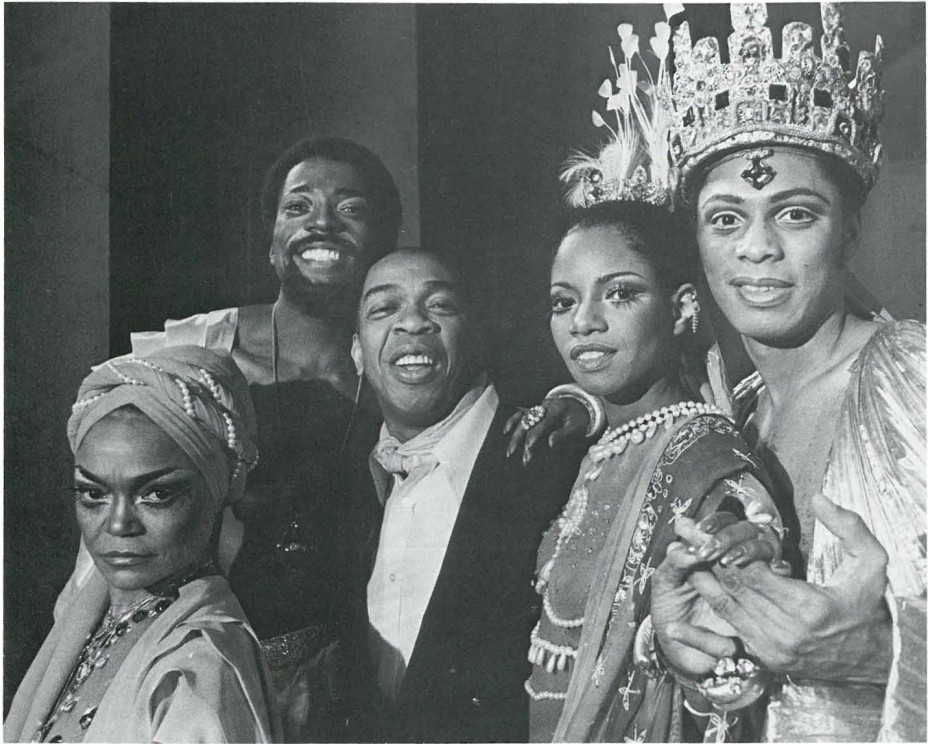 Although most of the productions are musicals, re-creations or adaptations, they offer several surprises for the theatergoer. Most notable, Luther Davis’ Timbuktu! which opened at the Opera House of the Kennedy Center for the Performing Arts in Washington, DC.

Described by Mr. Davis as an African musical, Timbuktu!  is actually an adaptation of the producer’s 1953 hit show, Kismet, which earned several Tony awards and produced three hit songs, Stranger in Paradise, Baubles, Bangles and Beads and This is My Beloved.

Under the capable guidance of Geoffrey Holder, who is director, choreographer, and costume designer, Timbuktu! is set in Mali during the 14th century. Indicative of his passionate love for color, Mr. Holder creates thriving African marketplaces and opulent palaces; he adorns his dancers with beads, feathers, straw, and shells.

In his role as choreographer, he scores again, demonstrating a thorough understanding of the relationship between sound and the Black body. His Birds of Paradise, performed by Miguel Godreau and Eleanor McCoy, is stunning. Mr. Godreau, who has performed with the Alvin Ailey troupe and the Harkness Ballet, dances with grace, sensitivity and ease, gently flapping his wings and raising his beak as if he were the first bird of spring.

But Mr. Holder must now focus on his directing. His characters lack the depth of personality that should enable audiences to know them and anticipate their actions. In this area only Ms. Kitt and Gilbert Price succeed. Ms. Kitt, in her role as Sahleem-La-Lume, wife of the Wazir, is superb. In fact, nearly all of her appearances onstage are highlights of the show. Her purr-like whisper is perfectly suited to the seductive and often sinister qualities of her character.

Similarly, Mr. Price shines in his portrayal of the love-struck young ruler, Kasa. His childlike charm and zeal lend credence to his performance. He jumps, rolls, frolics in his happiness; then pouts at the loss of his beloved Marsinah. Mr. Price, incidentally, gained widespread recognition and critical acclaim for his performances in Lost in the Stars and The Roar of Greasepaint.

Marsinah, Melba Moore appears to be a character of little depth, and faints easily. Ms. Moore has interjected her fresh, winsome comical charm in this role. Had it not been for Ms. Moore’s sheer professionalism, Marsinah’s metamorphosis from peasant to nouveau riche could have become as boring as the Perils of Pauline. Her musical rendition of Baubles, Bangles, and Beads and Stranger in Paradise with Gilbert Price and her solo reprise of Stranger in Act II were among the few show stoppers.

Veteran Shakespearean actor William Marshall, who is probably best remembered for his film ventures, did not perform on the evening we viewed the show. He was replaced by Ira Hawkins, who handled the character of Wazir admirably. It seemed unlikely that the original Alexander Borodin theme would mesh with tribal rhythms and African drums. But musical director Charles Coleman, whose successes include The Wiz, Raisin and No, No, Nanette, has made it work. He has dropped several songs from the original score and added four new ones, including In the Beginning, Woman. Unfortunately, Miss Kitt’s performance of the song was muffled and often inaudible.

“I think Geoffrey has done a wonderful job,” Ms. Kitt said recently. “We realize that we have a long way to go in making this show as spectacular as we want it. But all the ingredients are here, and we intend to make it represent our people the way we think they should be represented. And with the public’s support, we will.”