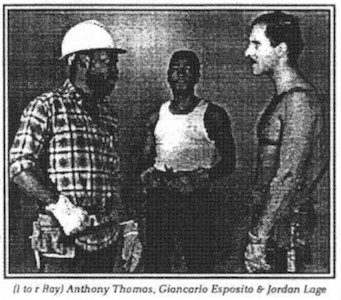 Distant Fires, written by Kevin Heelan, and directed by Clark Gregg, currently playing at The Atlantic Theatre Company, 336 West 20th St, sizzles with a timeless theme whose searing message burns close to home. Much like A Raisin in the Sun, the play revolves around the drying up of dreams due to racism. It all takes place in one day, in the present, somewhere downtown in a major city in Maryland. Heelan has woven a drama, around six men working on a construction site, which deals with the inalienable right to the pursuit of happiness vis-a-vis race, economic status and skills. The play is centered on the struggles and aspirations of Foos and Thomas—two young black men.

Ray Anthony Thomas renders a sharp portrait of Thomas, a consistently diligent worker who believes that one rises on individual merit. Thomas is fill ed with excitement because he feels certain that he will be offered a position in the union after 3 years of working very hard. But he learns, to his dismay, that Beauty, an incompetent young white man, is also being considered for the union slot. And Thomas believes that this new development is a backlash from the race riot that occurred in Foos’ neighborhood the night before.

Another thing that disturbs Thomas is how he is viewed by his white peers. They frequently mistake him as a resident of Cambridge, a low class neighborhood. He vehemently denies this and constantly reminds them “I’m not from Cambridge.” He tries to divorce himself from the white held view that all blacks are from Cambridge. It is racism that makes him continually defend himself against stereotypical images which are at the heart of the controversy over who gets the promotion. However, he feels that he is a hard worker and should be rewarded for it fairly.

Foos, richly portrayed by Giancarlo Esposito, as an angry alcoholic, is incensed over these stereotypical images too. But, unlike Thomas, Foos refuses to divorce himself from his racial group. Rather be links himself lighter to it and becomes militant. During a confront with Thomas, Foos poetically describes how blacks are inextricably bonded “Some Nigger throw a stone in Cambridge bit some Nigger in the face in Texas.” However, like so many unfocused youths facing blatant discrimination, Foos is consumed with rage. He turns to alcohol to restrain his desire to lash back.

Jordan Lage convincingly portrays Beauty as a braggart who masks his insecurity and incompetence with excuses. Beauty and Foos often confront each other because they’re so much alike-both are on the brink of exploding. But It takes Angel(Todd Weeks), a white co-worker, who tries bard to get-along with everyone, to ignite Beauty’s fuse.

Angel, a college student on semester break, sincerely wants to earn his pay and get along with people. He gravitates to Raymond, a powerful black man with a teddy bear’s soul. Raymond, portrayed by David Wolos-Forteno, has allowed his dreams of success to dry up like a raisin and expects Foos to do the same. “Foos keeps hoping for things to happen with his heart too much,” be explains to Angel, adding “but you got to get to the place in things where you say this is it. That’s the way things gonna be.” Raymond’s resignation is his calm.

Jack Wallace is strong as “the General” who represents the management of the construction site. He has the power to make the promotion fair. How be handles this power creates a dramatic ending.

Everything about this production is convincing from the acting to the direction to the set design. Distant Fires runs through December 1, 1991. For reservations (212) 645-8755

See the original layout of Routes, A Guide to Black Entertainment November 17, 1991 as pdf.