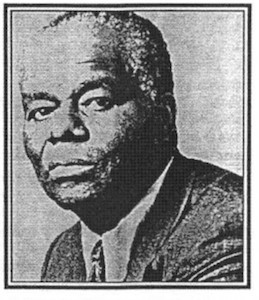 We would like to preface excerpts from Dr. Clarke’s lecture with an explanation: We think that it is important to look at this renown historian. In light of the continuing public interest in Malcolm X, we have chosen excerpts of Dr. Clarke’s as they relate to an historic figure like Malcolm X. And Dr. Clarke has firsthand knowledge of him. However, we are not endorsing his points of view nor his position.

If you did not know what Dr. John Henrik Clarke looks like-then you would not have guessed that the man seated in the front row was the renown historian. The slight octogenarian sat quietly, perhaps, indulging in an occasional snooze. The sight cane was lying at his feet.

On October 31, 1991, Dr. Clarke spoke at the Harlem Branch Library. On that evening, a young man guides him onto the stage, and he, clicking his sight cane, takes a seat behind a bare folding table. For some minutes he remains motionless. Possibly he is tapping the well spring of knowledge and experience from which be recounts the legacy of Malcolm X.

To appreciate the teachings and contributions of Dr. Clarke, first you ought to have an understanding of his past. “When I was 23 years old,” remarked Dr. Clarke, “I wrote a story, part fiction, part fact, inquiring about the racial identity of Jesus Christ. It was called The Boy Who Painted Christ Black. That story has been anthologized and reprinted all over the world. I wrote it upstairs in this library.”

“The library’s played a major role in my life because I’m self·educated. Most people don’t know that. I went to college on a high school equivalency and got thrown out of NYU because I criticized the way they were teaching while history. I didn’t expect them to teach black history at all. Then I went to the New School for Social Research and instead of learning history, they let me teach it. In formal education, I almost finished the seventh grade. I finished the first half, didn’t finish the second half. Yet I’ve read more books than most men see in a lifetime. I have trained almost two generations of PbDs and my students are doing useful work around the world.”

“Someone asked me, ‘Inasmuch as you don’t believe in the western concept of heaven and hell, where do you think you’re going to go when you die?’ I said, I ain’t going no place. I’m going to stay right here. In the things that I have written and the lives that I have known and the little good I have managed to do, I will stay right here. You’ll bury the man and continue his plan. That’s the hereafter that I long for and about the only one I believe in. Now, let’s get to work.”

“I want to discuss not just Malcolm X, but his antecedents. We have not made the best use of our messengers. Malcolm X is just one of the many, we have neglected to heed. In many ways we have seen his type before in our history. Let’s pick him up around 1360 BC in the presence of a sickly boy called Amenhotep, before he came to power as Ikhnaton.”

“Ikhnaton did not crave power. He was empowered, so he assumed the responsibility. When he came to power, he did something that was revolutionary and radical. He outlawed war. He was a King of Peace, a radical King of Peace. He said that all the nations under Egyptian dominance wishing their freedom would not have to fight for it. If they wanted to be free, he’d give it to them.”

“Many historians misunderstood him. He dissolved the Egyptian Empire of that day. Walter Wagdale in his book Great Personalities Integrity, called his chapter on Ikbnaton, The Adventures of a Nigger King. Ikhnaton and his wife, Nefertete, humanized the Egyptian mind. Many people would sculpture them showing affection with children on their knees. He was a man who wrote poetry. He’s often being given credit for giving the world monotheism. That credit is wrong. Before corrupt priests, the world had a concept of the Oneness of God. What Ikbnaton did was to give them back what they bad before.

“Now, how does that relate to Malcolm? What Malcolm X did for us was to try to give us back what we had before. He was trying to lead us back to a concept we had lost in slavery and colonialism. The concept of nation. The concept of land. He was not trying to give us a new concept, but a new methodology to reclaim some old things that gave us strengths that we had stopped appreciating. Until a leader calls for the return of the land, he’s misunderstanding nation. Malcolm X taught us how to look at our enemy in a different way. He taught us how to at least identify him and know that you can’t fight the slave master and sleep with him at the same lime. If you love the slave master’s daughter, you have less Jove for your own.

“When Malcolm’s father, a Garveyite, was murdered and his body dumped onto the family’s porch, it caused his mother to go mad. The mind of Malcolm, the man, was being prepared for what he would later be.
“He would have no problem later on in identifying the people who killed his father as being ‘the devil’ because whosoever is in charge of the hell—in your life—is your devil.” Dr. Clarke paused and repeated “Whosoever is in charge of the bell in your life is your devil, and sometimes be is black.

“In school, white teachers told him ‘Don’t take your ambitions too far. Go to shop, be a good carpenter or a good mechanic.’ In other words, be a servant of this society, but never be a master of this society. Be assistant to it, but never be it. Malcolm’s mind was in revolt against their concept …. Growing up, going to Boston, getting into difficulties, coming to Harlem, becoming a taker of dope and a seller of dope and a hustler of while women. He continued hustling dope, going back to Boston … then eventually going to jail.

“One thing about jail is you are static. You are trapped. And the one person you cannot get away from is yourself. You do the one thing that people should do all the time, take a good look at yourself. Malcolm had lime to look at himself. He bad time to discipline himself. He had time to be concerned about the conditions in the prison …. He wrote to the warden about the conditions of other prisoners …. He was an influence in the prison. Self-discipline was the way Malcolm approached life. This discipline led to his reading. Not being good at words he began to study words …. He took the dictionary and started at A and went straight through to Z. And yet his speech had a simplicity that when he said something, it was so simple you could remember it years later. When Dr. King spoke the one thing you could remember was he spoke so pretty, so eloquent. But what did he say? We still know exactly what Malcolm said, after all these years. Always learning something he would teach others how not to do later, ‘You do not survive at the expense of your brothers and your sisters’.

“Maybe the greatest contribution of Elijah Muhammad and Malcolm X, ’cause you can’t take one without the other, was that they didn’t steal people from the little church or the big church to recruit them into the Nation of Islam. They took: people out there who bad no allegiance. They took the neglected. They took people who’d lost confidence in themselves and made them whole. Malcolm found in Elijah Muhammad the father that he had lost. He adopted Elijah Muhammad and Elijah Muhammad spiritually had adopted him.

“Years later, after leaving the Nation of Islam under duress, Malcolm founded the Muslim Mosque, Inc. and the Organization of African American Unity (O.A.A.U.). He traveled to Africa to bring some unity to Africans in the U.S. and Africans in Africa. He persuaded eight African nations to bring African-American problems before the UN as a Human Rights issue, opposed to a Civil Rights issue. On his way home, Malcolm tried to stop in Paris, but was refused entry. He tried to stop in London, but was refused entry. Malcolm then knew that an international force had been put in motion against him. The Nation of Islam couldn’t keep him out of Paris or London. They didn’t control anything there.

“Within weeks, he was assassinated in the Audubon Ballroom, New York. At the first memorial for Malcolm, I talked about our final conversation. I had asked Malcolm, ‘What can I do?’ He said, ‘Do your best work. The best thing you can do in memory of me is to do your best work.'”

“I realize that of all the things I wanted to do in life, thanks to an inspirational fifth grade teacher, was to be a great classroom teacher. And in the years since Malcolm’s death, I have trained a generation to think better of themselves through an understanding of history. This is my memorial to him.”

Dr. Clarke will be the guest speaker at the Harlem School of Arts(see Museum & Cultural Centers listings) on January 12 at 2 p.m. and he will speak on January 22, 1992, 7:00p.m., at The Slave Theatre in Brooklyn. A book signing party is scheduled for January 31, 1992, at the State Office Building in Harlem.

Back issue of Routes, A Guide to Black Entertainment January 6, 1992