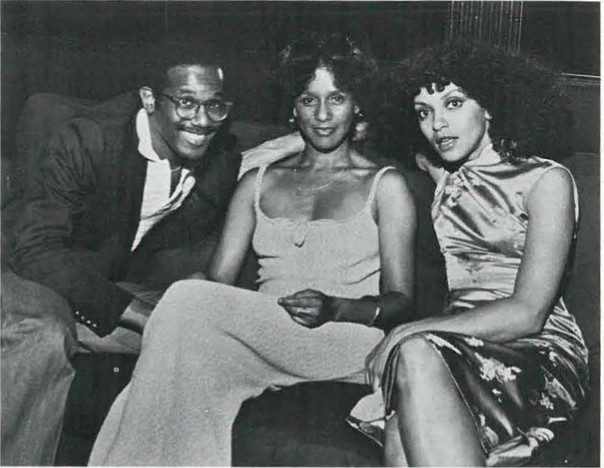 WNEW-TV’s Black News Arts Editor, Marian-Etoile Watson donated to the John D. Rockefeller, Jr. Library at Brown University, letters, papers, books and memorabilia of historical significance dating back to the 1800s. Dr. John B. Watson, a colleague of Dr. John Hope and Dr. Horace Mann Bond (grandfather of Julian Bond), was president of A.M.&N. College in Pine Bluff, Arkansas before his death in 1942, Dr. Watson was a 1904 graduate of Brown University. Mrs. Hattie L. G. Rutherford-Watson, a 1907 graduate of Spelman College, Atlanta , Ga., is a member of the distinguished Rutherford family of Washington, DC Film star, Vonetta McGee, who has just returned from filming Fox Bat in Hong Kong, has expressed interest in researching the life of Marian’s mother. David Hepburn, WNEW-TV’s Vice President will be preparing notes for a series of articles on her father as well as the complete Watson Collection.

John Procope, publisher of Amsterdam News and Chairman of the Emergency Aid Commission and Wallace L. Ford, II, President of the Harlem Lawyers’ Association expressed their thanks to David Dinkins for assisting in the general effort of the Emergency Aid Commission in its endeavor to provide financial assistance to local merchants who suffered losses during the recent blackout.

David Dinkins is the Clerk of the City of New York who aspired to succeed Percy Sutton as Borough President. He is one of New York’s finest citizens.

When Demond Wilson, who played the son in TV’s Sanford and Son, discovered his CBS dressing room didn’t have a toilet, he was flushed with anger. So right in the middle of taping his pilot, Baby, I’m Back, Demond, reportedly, shocked the live audience by screaming at the producers: “What do you think I am, a nigger? Do you think I am dirt?” That dressing down got him a new dressing room.

She writes the songs:

Composer Micki Grant‘s collection is currently on display at the Songwriters’ Hall of Fame Museum, founded earlier this year by Sammy Cahn, President and Oscar Brand, Curator. Also on display in this special exhibit focusing on women songwriters is gospel composer Clara Ward’s robes and tambourine. ROUTES taking the time to witness this exhibition.

City Wide Vanguard saluted several hundred senior citizens at the Harlem State Office Building Mall on 125th Street, the Theme of the day It Makes A Difference When Somebody Cares. An array of show business stars gave block busting performances. The high light of the show was the 1977 Community Entertainer Award presented to Dewey (Pigmeat) Markham. The host of the program was Willie F. McClendon, Jr. Reverend Robert Royal, Chairman of the City Wide Vanguard said, “Future programs are slated to be held throughout the year in recognition of Community Awareness.”

Famous Black historian, Dr. John Henrik Clarke, spoke on the importance of the Garvey Movement at an African Festival commemorating the life and work of Marcus Garvey, the “father of revolutionary Pan-African nationalism.” The festival was held at Medgar Evers College in Brooklyn. Clarke emphasized the fact that Garvey’s teachings have been distorted, and that many of the things that Garvey taught years ago are directly applicable to our situation today.

Billy Daniels generated some beautiful magic when he appeared at Hopper’s Cafe recently. Billy gives a song the total treatment. On the faster tempos, his body snaps, his head rolls. With a ballad, the body tenses, the face acquires an anguished smile. When he sings the nostalgic Beautiful Girls, he summons up the guts of a still-powerful voice and, tempered with softer tones, paints a piquant picture of an aging roué. Billy Daniel’s charisma is unending.

The only Black member of Sha Na Na , (whose forte is the songs of the fifties) Denny Greene, won a University-wide play writing contest and hosted his own radio show while attending Columbia University. He has written a novel, The Ebony Grip, from which an album was born. In his attempts to span the media segments, he and another Columbia University student created a filmmaking program for Black kids attending the elementary school he attended on 112th Street. He taught them how to make super 8 mm films. ROUTES applauds Denny — an example for many to follow. He, by the way, is the founder of Sha Na Na.

Paul J. Barnes is the newly appointed manager of the Harlem State Office Building. John M. Horne, general manager of the customer programs divisions of the Northeast postal region in New York, has been named director of customer services for the 13-state central postal region with headquarters in Chicago. Shawn Leach, 16-year old sophomore at Simon’s Rock Early College in Great Barrington, Mass., was recently voted the youngest New York State delegate to attend the First National Women’s Conference in Houston. Louise Williams, is the first woman, Black or white, to be employed on a city construction job as a mason tender. Karen Bryan Wheeler has joined the Savings Bank Association of New York State as assistant director of Community Development and Housing Finance. Ms. Wheeler is former deputy of the New York Urban League’s Queens branch. Angela A. Crosdale, of Rosedale, Queens, has graduated from Mount Sinai School of Medicine and is presently on the staff of Mount Sinai Hospital. Dr. Crosdale, an honor graduate of Hunter College and City University of New York, is specializing in obstetrics and gynecology. Ruth Bowen, former owner of Queens Booking Agency and former head of the entertainment department at Don King Enterprises, is now talent agent for Renaissance Enterprises.