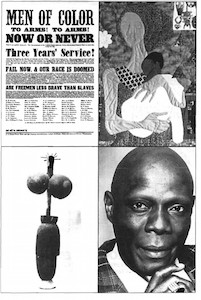 See what was important and what happened in the African-American community March 15, 1994.

Walk into almost any of New York City’s art museums and you’ll see an exhibit celebrating and extolling art from the African continent and its progeny.

It wasn’t always so. Time was when the interested strained neck, here and there, to find the occasional show that reflected the African-American experience. What a longing there was in those desert days to see our art represented as part of the main stream of American cultural life. Today African-American art is hot property, and a recent issue of Art News speaks of “a pent up demand” for it. Also, with the annual celebratory February rest, African-American history month, galleries and museums showcase works so as not to be found wanting.

One of the most impressive exhibits currently on view is “African Zion: The Secret Art of Ethiopia” at the Schomburg Center for Research in Black Culture (Lenox Avenue at 135th Street). Including over 90 works, it investigates the Christian Art of the Orthodox Church of Ethiopia which dates back from the fourth century AD A treasury of ancient coins, crosses, illuminated manuscripts and icons are to be seen along with exhibition forums and an eye-catching and profusely illustrated catalog that no viewer would dare not require.

At the Metropolitan Museum of Art (Fifth Avenue at 82nd St.) there is a year-long celebration of “Africa: The Continent and It’s Art.” Exhibits portray and explore the artistic and cultural traditions of ancient, Byzantine and Islamic Egypt and the diverse sub-Sahara peoples. Two notable offerings are “The Gold of Meroe: The Hidden Treasures of a Nubian Queen,” and “Elephant: The Animal and Its Ivory in African Art.” A Series of public lectures round out this exhibit.

On view at the Pierpont Morgan Library (36th St. at Madison Avenue) is “Seeds of Discord: The Politics of Slavery.” It examines in an informative, enlightening, and emotionally powerful way the issue of slavery in American life. Over 40 historical documents, manuscripts and correspondence from Frederick Douglass, Harriet Beecher Stowe, Abraham Lincoln and George Washington and others are on display.

The American Craft Museum (53rd St. between 5th and 6th Avenues) is hosting “Uncommon Beauty in Common Objects: The Legacy of African-American Craft Art — an exhibit designed to introduce national audiences to the craft traditions in African-American culture and serving as a vehicle for preserving native tradition. Over 100 objects by 70 artists ” ceramics, furniture, textiles, baskets, quilts, glasswork, and jewelry are shown.

Honoring Faith Ringgold for enriching contemporary American art, and for her leading role in the Women’s Art Movement is the Queens Museum of Art (Flushing Meadows Corona Park, Queens) exhibit: “The 1984 Women’s Caucus for Art Honor Awards Exhibition.” As one of six honorees Ringgold, an artist, teacher, and writer of award winning children’s books is being celebrated for her Tar Beach quilt series on loan from the Guggenheim Museum. The series set in Harlem of the 30s recounts how during hot summer nights families moved to the roofs of their brownstones ( the Tar Beach) to cool off.

“Climbing Jacobs Ladder: The Rise of Black Churches in Eastern American Cities, 1740-1877” on view at the Hudson River Museum of Westchester celebrates Black Churches as not only houses of worship but also centers for a broad range of community issues such as education and evolution.

The recently closed groundbreaking “Imagining Christ: Christian Iconography in the Art of African-Caribbean peoples in the Americas” at John Jay College sought to portray the rich variety of Christian iconographic style among African-Americans and the diverse peoples of the Caribbean.

Art from both the African continent and the diaspora has a permanent home in Soho, at the Museum for African Art (593 Broadway, just south of Houston). Since moving into its location last year, the museum has shown wit and imagination in its choice of exhibits; and Maya Lin’s brilliant interior design makes for an elegant and suspenseful tour.

The museum is always worth a look, but the current exhibit, “Fusion: West African Artists at the Venice Biennale,” running until August 7, carries a mix of Dahomean magic and European cachet. From the cryptic messages of the late Senegalese painter Mor Faye to the Portent messages in the constructions of Ivory Coast’s Quattara, this collection gives a taste of some of the creative stew boiling around the bight of Benin. As if that’s not enough, there is also an exhibit of African Art from private collections running through April 10.

In a sleepy neighborhood at the other end of town stands Raven Chanticleer’s African-American Wax Museum of Harlem (316 W. 115th St.), one of the few truly extraordinary cultural experiences to be found in the Big Apple.

Proprietor-curator-director-artist-tour guide-museum guard Raven Chanticleer lends the museum the air of the eccentric novelty museums that populated small-town America in the days of your. But he and his museum could be found only in New York.

The cozy gallery, with its wood floors and raffia-lined walls, is filled to capacity with Ravens handiwork, beginning with a folding chair built for the 1942 Worlds Fair and continuing through a wax work Mandela unveil last year. Along the way you’ll find an encyclopedia of painting styles, ranging from two-tone portraits of historic people to seascapes.

Add to that a colorful series of New Testament scenes, spritely paintings from African-American history, a portrait of Beethoven accentuating the composer’s African ancestry and an array of wood carvings. And that’s just the half of it. For the heart of the museum is in its wax figures ” Malcolm X, Adam Clayton Powell, Martin Luther King, Jr., Nelson Mandela, Josephine Baker, David Dinkins and others ” all made from a “secret formula” which no torture or reward could ever persuade the artist to reveal. The result is New York’s only wax museum for African-American figures, and as far as we know, New York’s only wax museum of any kind. Now we can truly say that New York has everything.

Still it is a little difficult to speak of the museum without speaking of Raven himself. On most days he can be found herding busloads of students around the place, grandly lecturing and never letting the little ones unsettled his imperial demeanor. And he gives the tour to all visitors; Raven’s running monologue is something you don’t want to miss. But while the museum is open from 1:00 pm: to 6:00 pm, Tuesday through Saturday, be sure to call first for an appointment (212) 678-7818.

See the complete issue of Back issue of Routes, A Guide to Black Entertainment March 15, 1994 as PDF.