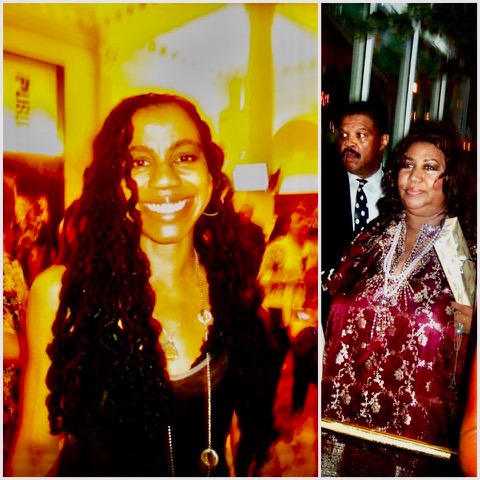 I met Pulitzer-Prize Winning Director, Writer, Musician Suzan-Lori Parks several times over the years. Suzan-Lori is the first African-American Black woman to receive the Pulitzer Prize in Drama in 2002 for her play “Top Dog/Underdog”.

Years before in 2010, I was invited to Senator Charles Rangel’s birthday party.  (It’s an annual event for those in-the-know.) Aretha Franklin, the “Queen of Soul” was the entertainment — she performed wonderfully, as usual. (I captured her in this photo with gift in hand for Senator Rangel. Ms. Franklin was waiting in the wings).

Who knew that the film Genius: Aretha starring Cynthia Erivo would bring both Ms. Lori-Parks and Aretha Franklin in galaxy alignment.  This film docu-series recently aired on Nat’l Geographic channel is revealing. Who knew Ms. Aretha smoked like a chimney and that her iconic preacher father had real flaws?

Director/Writer Suzan-Lori Parks, and the rest of the team of producers and actors, nailed t! Congratulations to both of these gifted ladies. Stars do Align sometimes.